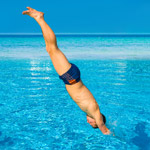 MADISON — How low will you go?

You'd better know the answer if you're diving headfirst into water.
Not knowing the depth of the lake, river or even backyard pool can lead to disaster in an instant – the kind of disaster that changes lives forever.

Greg Rebella, MD, assistant professor of emergency medicine at the University of Wisconsin School of Medicine and Public Health, saw this for himself several years before he started his medical career when a diving injury left his close friend a quadriplegic at age 19.

"The real tragedy is the personal loss of the ability to function independently," he says. "Spinal cord injuries from diving accidents can be devastating on many levels and nearly 100 percent avoidable by exercising good judgment."

According to the National Spinal Cord Injury Statistical Database, most diving injuries involve males in their twenties. Other key statistics show:
Rebella says people who want to dive into a body of water or swimming pool should know the depth of the water first, and to be safe, jump in feet first.

"You are asking for trouble if you dive headfirst into any body of water where you don't know the depth," he says. "When you jump in feet first, you have the ability to decrease acceleration by landing on your legs. When you dive headfirst, everything is going down on the top of the head or flexing the neck."

Rebella says the National Federation of State High School Associations has joined in the effort to reduce head injuries from dives by making it illegal for competitive swimmers to jump into water less than three and a half feet during all high school swimming and diving meets.

"This is pretty wide-reaching when you consider the number of high school kids involved in swimming," he says. "It's just a matter of using common sense to keep high school athletes safe."

"Consumption of alcohol takes away your ability to think clearly," she says. "If you don't know the area well, you may end up hitting your head on a big boulder, losing consciousness and drowning."

Rebella says it's important for parents to educate young children about water safety, and see to it the area has adequate supervision.

"Parents can help prevent serious injuries by teaching their kids how to play safely in the water and do the right thing," he says. "It's also the parents' responsibility to know the depth of the pool, instruct their children not to dive headfirst, and find out if someone will be there to watch over their children. They have to reinforce the need for water safety, especially when their kids are young."
Other injuries caused by ill-advised headfirst dives into shallow waters include serious lacerations, bruises and broken teeth.

"I've had kids come in with chin and forehead lacerations after playing at a water park," says Rebella. "Your child is risking injury any time he or she jumps into an area not known to be deep. I would say those patients were lucky because they could have sustained more serious injuries."