Why: To support GI cancer research at UW Carbone

Interested in signing up? Or just making a donation? Head on over to uwhealth.org/bowlin. 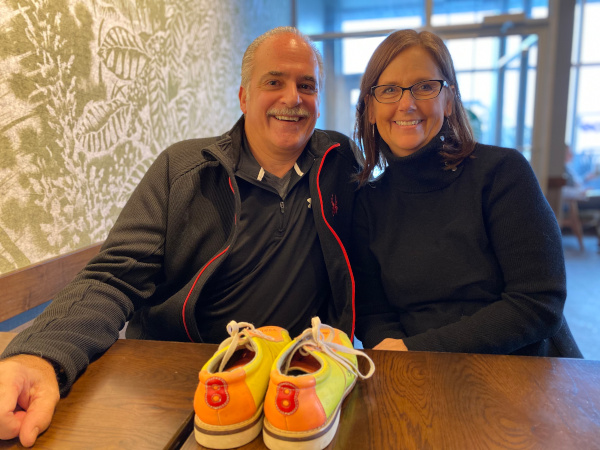 Joe and Rochelle Guastella were about to leave on their dream trip when life threw them a curve.

The Sun Prairie couple was planning on spending some time in Italy in late 2013. But Joe, who had just had his very first colonoscopy, received some unexpected news. The test results showed he had stage III colon cancer, which had started to spread to the lymph nodes. His doctor told him he needed to see a surgeon right away, which put their Italy plans on hold.

“We were about ten days out from the trip,” Rochelle said. “We had plane tickets and everything.”

Thanks to a last-minute opening, Joe was able to get in for surgery just days later at UW Hospital. The whole thing moved incredibly fast. “We didn’t have time to dwell on it, which I think was good in a way,” he said.

Following surgery, the Guastellas met with UW Carbone Cancer Center oncologist Noelle LoConte, MD, who got Joe on a treatment plan that included six months of chemotherapy. “We felt like she saved my life,” he said. “She was really understanding, she had a plan right away.”

While getting a cancer diagnosis can make everything feel like it’s out of your control, LoConte’s decisiveness put the couple at ease. “There’s something about taking control of the situation and having a plan that made it feel okay, like we knew we were going to be okay,” Rochelle said.

As it turned out, Joe was okay after receiving treatment. He’s been cancer-free ever since, and the couple eventually made good on that Italy trip.

The whole experience left the Guastellas wanting to give back to UW Carbone, as well as wanting to make a difference for other patients dealing with colon cancer.

The Guastellas have participated in the team-based event every year since the end of Joe’s chemotherapy, and were the first participants to register for this year’s Bowlin’ for Colons, though that part wasn’t necessarily intentional. “I just wanted to get in and get it set up so that the money went right into the pocket where it needed to go,” Rochelle said.

This year, the couple will be bowling alongside friends, as well as their daughter, who’s making a special trip from the west coast to be here for the event. If anyone on their team is looking to them to put up high scores, they may want to look elsewhere. “It’s the only time we ever bowl,” Joe says. And Rochelle adds, “I feel like a lot of the fun comes from the stylish shoes that you get to wear.”

Neither seem too concerned about putting up strikes and spares. If anything, their attention is on breaking their fundraising goal of $500. It’s money that will have an immediate impact, allowing Wisconsin-based researchers to continue testing and developing novel treatments for colon cancer, which remains the third most commonly diagnosed cancer in the United States.

So whether you’re looking to roll a 300, or just sport some neon shoes that may or may not have Velcro, there’s no bad reason to sign up. “It’s a fun Sunday afternoon for a really good cause,” Joe said. “If you talk to most people, I bet they know somebody that has suffered from colon cancer. Maybe not a relative, but a friend of a friend or somebody. This is for them.”