Controlling the Costs of Cancer Care

Controlling the Costs of Cancer Care 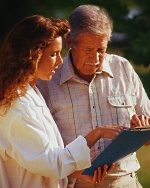 "In every type of cancer, we see a projected increase in cost from 2010 to 2020," said Dr. David Vanness, an associate professor in the University of Wisconsin School of Medicine and Public Health's department of population health sciences. "Cancer costs are going to rise for all types."

At this year's UW Carbone Cancer Center symposium, Dr. Vanness spoke to a group of cancer providers and researchers about the work he is doing to investigate ways to reduce those costs. But to do so, he first had to find out the reason for the dramatic difference in expenditure between the United States and its European counterparts.

Dr. Vanness began with some good news. The price of cancer care is increasing everywhere, albeit not at the same rate, and survival rates can explain a portion of the rising costs.

"More people are surviving," he said, but quickly added that this positive development brings an attendant responsibility. "We need to use the resources we have wisely."

Thus far the United States hasn't done so, because of a tricky combination of technological expansion and structural flaw, blended with a distinct lack of political will.

In a paper produced while he was director of the Congressional Budget Office, economist Peter Orszag pointed to the rapid advance of technology as "by far the largest driver in the increase in health care costs," said Dr. Vanness.

New, effective drugs are developed, but the costs of these therapies are prohibitive. A few approach $25,000 per month, and $10,000 per month is by no means a rare charge. The world of advanced imaging is also a culprit. Scans get more accurate and detailed by the year, but with every step forward imaging costs soar, and not always to the patient's benefit. Dr. Vanness mentioned a study that demonstrated between 2002 and 2006, patients with stage 4 colon or breast cancer received an average of 9.8 imaging and PET scans after diagnosis, "with little evidence it improved care."

As a result the United States finds itself locked in what Northwestern economist and public policy analyst Burton Weisbrod calls "the health care quadrilemma," a self-sustaining system that guarantees health care costs will continue to rise if changes aren't made.

Insurance is the driver of Dr. Weisbrod's quadrilemma. It's the way the United States pays for medical care, and it makes the recent developments in the medical technology industry affordable and increases patient consumption. This increased consumption, argues Dr. Weisbrod, results in larger markets and motivates increased research and development.

New – and more expensive – treatments inevitably result and, in a Hellerian twist, these expensive treatments increase demand for insurance. The whole process then starts anew.

"How do we break that cycle?" Dr. Vanness asked.

Peter Orszag had an idea. He proposed adding cost-effectiveness to the method of evaluating treatments that only insisted upon safety and efficacy. It's what the European countries that have proven better at controlling health care costs do and, according Dr. Vanness, it's the reason similar costs in the U.S. have soared in the past 30 years.

"Other countries use cost-effectiveness analysis to form policy around national health insurance plans," said Dr. Vanness. "They have the ability to reject drugs on the basis of cost, and they will only pay for treatments that are better than existing ones."

So why hasn't the United States embraced the approach of its European counterparts?

Which is actually just a way of saying the United States isn't ready to have the difficult political discussion cost-effectiveness analysis entails.

It's something with which countries that include cost-effectiveness as a factor in the health care policy calculus continue to struggle. Some effective therapies are designated too expensive, and thus are unavailable to people who may benefit from them. Policy decisions that are rational at the macro level can be interpreted as cruel at the micro level.

The countries that have succeeded in controlling health care costs have made these difficult decisions. The United States has not, instead splitting the difference with "comparable effectiveness" approach that puts massive flows of information about the effectiveness of treatment courses in the hands of patients and providers, who are then responsible for making reasonable decisions. The Patient-Centered Outcomes Research Institute (PCORI), a non-profit organization funded by the Affordable Care Act, was created for this very purpose.

Will initiatives such as PCORI help? Dr. Vanness is skeptical, saying that even introducing comparable effectiveness research resulted in the death panels uproar that dominated cable news shows in the early days of the Affordable Care Act.

"Approaches that have been effective in Europe have massive political costs here," he says.

Dr. Vanness, however, does see avenues for progress, and he appealed to the health care providers at the symposium to demand approaches to research and treatment that emphasize the patients' concerns.

"We can demand better research that is closer to the comparative effectiveness end, and focuses on what matters to patients, what makes them feel better," he said. "We should be involving patients earlier and more frequently (in clinical trials), and conduct them in real-world settings."

Dr. Vanness was also critical of the "blockbuster" approach to cancer therapy development, which brings to market drugs that offer irrefutable, if limited, benefits for large segments of the patient population. Blockbuster drugs are very profitable for their manufacturers, but is a drug that prolongs the lives of a large number of people for, say, a month better than one that generates less revenue and lets fewer people live higher-quality lives for another five years? Another 10?

"We have to acknowledge that there is scarcity," Dr. Vanness said. "Somebody has to start thinking about our common resources that are under threat."