Madison, Wisconsin - When Barb and Doug McNeely made the drive from the Twin Cities to the Madison area in fall 2013 to research their family roots, they had no idea that their weekend visit would turn into an 11-day stay at UW Hospital and Clinics.

It was a fall Sunday and Doug had just finished exercising on the hotel treadmill. The couple was relaxing, watching some football in their hotel room when Barb noticed a sudden change in Doug. She knew something major was wrong when Doug's eyes rolled back in his head. She called the front desk to summon help and call 911, and started CPR on her husband.

The first person to arrive at their hotel room was a deputy sheriff who happened to be at the gas station next door and heard the 911 call. He took over providing Doug with CPR until a paramedic unit arrived and used an automatic electronic defibrillator to restore Doug's heart rhythm.

Doug was then taken by ambulance to UW Hospital and Clinics. In the Emergency Department, the hospital staff began cooling Doug's body temperature to 93 degrees through a process called therapeutic hypothermia. The technique has been used at UW Hospital and Clinics since 2006 to enhance a patient's chances of survival, and survival with good neurologic recovery.

Because cardiac arrest limits blood flow, this can lead to irreversible brain injury. Immediately following the cardiac arrest with restoration of normal blood circulation, the brain tissue remains vulnerable to additional injury due to inflammation and swelling. 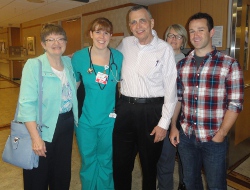 "Studies have shown that induced hypothermia enhances a patient's chances of making a full neurologic recovery," said Dr. Anne O'Connor, director of UW Hospital's Cardiac ICU. "By dropping the body temperature to 93 degrees, it slows the body’s metabolism and decreases brain swelling, which helps protect the brain from further damage."

While many hospitals use hypothermia for cardiac arrest patients, the technique is standard therapy as part of UW Hospital and Clinics' Post Cardiac Arrest Protocol. The medical team determines and treats the cause of the underlying condition that led to the arrest. Following an arrest, brain injury is a major concern, but other organ systems, such as the heart and lungs, are also at risk for injury. It is important to aggressively support these organ systems during therapeutic hypothermia treatment.

Doug has a history of coronary artery disease, with heart bypass surgery done a year prior to his cardiac arrest. During his first night at UWHC, a coronary angiogram - a test that looks at the heart's blood vessels - was done to make sure that his arrest was not due to a new heart blockage. He did not have a new blockage. The medical team determined that his cardiac arrest was from an irregular rhythm that started in scar tissue in his heart from a previous heart attack.

After being cooled for 24 hours and receiving IV medications to support his blood pressure, Doug's body was warmed over the course of 12 hours to a more normal temperature. "After that, we wait and see how the patient does in regards to waking up," O'Connor explains.

Fortunately, Doug woke up and recognized his family. Within five days of his cardiac arrest, he began therapy and had a defibrillator implanted before returning home to Minnesota. After seven days of inpatient rehabilitation and then a few more months of outpatient visits for occupational and speech therapy, Doug says he's "a pretty happy guy." Aside from a few physical issues and some memory loss from the time of his cardiac arrest, his life is pretty normal.

So normal, in fact, that they wanted to drive back to Madison to thank the UW Hospital and Clinics staff who cared for him during those critical moments in his life. Take a look at his reunion with staff from the Cardiac ICU in May 2014.

While in Madison, Barb and Doug also visited the emergency responders who provided care - they were especially pleased to learn that the deputy sheriff received a citation for his heroic efforts during Doug's situation.