Dr. Ruth O’Regan believes that as her patients are being treated for breast cancer, they have enough to think about without having to worry about losing their hair during chemotherapy.

For some women, losing their hair creates a loss of privacy.

“It means that everyone in the world can see that you have cancer,’’ says O’Regan, a breast cancer oncologist and chair of the division of hematology/oncology.

For others, every mirror is a constant reminder of what they are up against.

“It brings home the fact that cancer is having a big impact on your life,’’ says Cissy Kerrigan, who was diagnosed with breast cancer twice, and lost her hair both times. 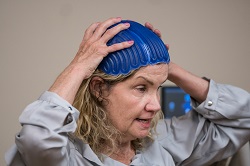 “A cancer diagnosis is frightening and losing your hair due to chemotherapy treatment can be depressing.  So being able to retain your hair is huge. It helps you maintain a positive outlook and feel and look like yourself.”

Today, Kerrigan works for Paxman Scalp Cooling, and says the system helps women maintain their privacy and gives patients a degree of control during cancer treatment.

Watch an interview about the cooling system from Channel3000

Cooling cap systems that help women keep their hair during chemotherapy have been around since the 1990s in Europe. When the U.S. Food and Drug Administration finally approved them in May 2017, O’Regan was determined to bring them to Madison for her patients.

The idea behind cooling caps is simple: Chemotherapy drugs attack rapidly growing cells, which include cancer cells and hair follicles. Cooling the scalp during chemotherapy restricts the blood flow, so the drugs can’t get into the hair cells.

UW Health is making the scalp cooling cap systems available for women undergoing chemotherapy at both the 1 S. Park Street and the University Hospital chemotherapy clinics. The caps only work well with certain drugs and not for all women. They also represent an out-of-pocket cost to women that insurance doesn’t typically cover. For more details, see information on the caps.

Kerrigan was in Madison recently to train the chemotherapy nurses on how to use the machines. 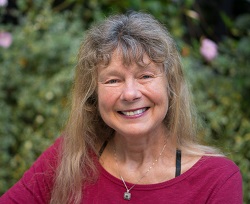 Also present was Dr. O’Regan’s patient Lynn Morke, of Milton, who went through chemotherapy for breast cancer a year ago.

“I was immersed in a sea of emotions after my breast cancer diagnosis,’’ Morke says. “I knew I was going to have chemotherapy.”

Morke wanted to keep her wavy blonde hair, and she went to great lengths to do it.

The Paxman system was not available then, so Morke had to use an older dry ice system, which was more expensive and a lot less convenient.

Her chemotherapy days went from dawn to dusk, and she needed the help of her aunt and a friend to pull it off.

“It wasn’t real easy -- we were in the Dark Ages,” Morke recalls. “We’d begin in the morning, filling a cooler with eight cold caps.”

First she went to a dry-ice distributor. Then she had to fill each of the eight caps with dry ice and load them into the coolers in sequential order. Her group would arrive at the chemotherapy clinic lugging three giant coolers full of caps.

During chemotherapy the caps had to be switched out, and the last one had to remain on her head long after the infusion was finished. This made for very long chemotherapy days. And the bulky caps filled with dry ice were not very comfortable.

“It was the biggest brain freeze you could possibly imagine,’’ Morke remembers. “The cold caps that I used had to be at 33 degrees below zero. The caps were just excruciatingly cold. I kept telling myself, ‘Okay, I can do this’.”

One reason the newer caps are more comfortable is that they’re not as cold. The nontoxic circulating fluid cools the scalp to between 64 and 71 degrees, enough to constrict the blood vessels and keep the chemotherapy drugs from reaching the hair follicles.

“With these new caps, the advance is just incredible,’’ says Morke. “I am so happy that finally women have this option.”

For good measure, she tried out one of the new caps during the training and proclaimed, “This is Heaven.”