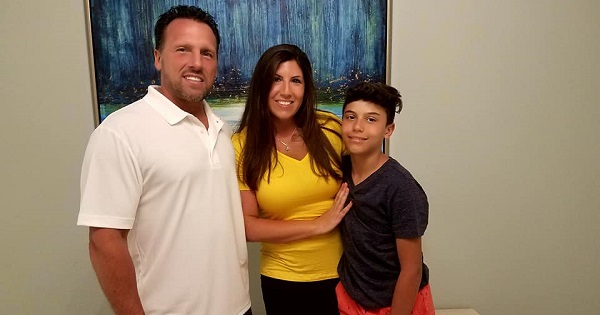 There’s something to be said for looking better than you feel.

Just ask Amber Pena, who was 32 while she was being treated for breast cancer. She was working a full time job in a busy office, running her own business and being mom to an active 11-year-old boy.

So it helped that she was able to use cooling caps while going through chemotherapy, which allowed her to keep the majority of her thick, long, black hair.

“It made me look better than I actually felt,’’ says Pena, who lives in Pecatonica, Ill. “I felt like hell on days after chemo, but nobody had a clue. My closest family and my boss knew, but I worked through the whole thing, and a lot of people had no idea.”

Cooling caps were approved by the FDA in 2017, and UW Health obtained the Paxman cooling cap system a few months later for its locations at University Hospital and 1. S. Park Street. Pena was the second patient to use the system. Since then, 38 patients have used the system through 166 rounds of chemotherapy. The FDA recently expanded the use, from breast cancer to most forms of solid tumor cancer.

Patients using the system pay $500 for caps that they keep, and another $250 for each treatment. A fund at the UW Health Breast Center, which comes from people who purchase Pink Lights in honor of breast cancer month, can help those who can’t afford the caps.

Pena says it was worth it, especially because it spared her 11-year-old son, Anthony, from worry and from having to explain to his friends when his mom came to his sports events.

“People stare when you are bald, they don’t know how to act,’’ she says. “I could tell the people I wanted to tell. It saved my son from embarrassment and avoided questions I didn’t want to have to answer.”

“On my worst days, it helped me feel a little better.”

Pena says that her breast surgeon, Dr. Lee Wilke, suggested trying the cooling caps. She said they worked so well for her that her medical oncologist, Dr. Amye Tevaarwerk, used to tease her.

“When my oncologist sees me, she freaks out,’’ Pena says. “She says, 'I don’t know if I even gave you chemo or not.'”

In truth, Pena figures that she lost about 40 percent of her hair, but says it wasn’t noticeable to others because her hair is so thick to begin with. Her advice to other women is not to give up on the cooling caps, because she thought she was losing a lot of hair, but ultimately was very pleased with how much she retained.

Her other advice is to “baby your hair.” Wash it no more than twice a week and avoid stressing it with treatments or tight ponytails.

Pena is happy to have her treatment behind her. She had surgery and chemotherapy in Madison and radiation therapy closer to home at SwedishAmercian Hospital in Rockford.

“It was a rough year. When you’re first diagnosed, you have nightmares, but as you go on, it becomes a little easier,’’ she said “Everyone says, ‘your hair is beautiful.’ No one knows what I went through, except those closest to me.”