MADISON - American Family Children’s Hospital was awarded a $100,000 "Hope Grant" from Hyundai to support childhood cancer research and programs dedicated to improving the lives of children with cancer.

The gift is part of the "Hyundai Gives Hope on Wheels" program. The company will award $6.8 million in the form of grants to hospitals and non-profit organizations across the country in September, which is Childhood Cancer Awareness Month. By the end of 2010, Hope on Wheels will have donated more than $23 million to fight childhood cancer since its inception in 1998. 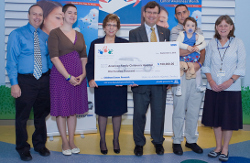 He spoke specifically of a new treatment for neuroblastoma that has shown signs of progress. Cancer researcher Jacqueline Hank said that thanks to the therapy, which involves an anti-body that stimulates patients' immune systems to destroy cancer cells, cure rates have risen from 46 percent to 66 percent.

Dr. Ken De Santes, a pediatric oncologist and associate professor of pediatrics at the University of Wisconsin School of Medicine and Public Health, said the grant will help fund important research.

"This represents a very important step in the cure for neuroblastoma, which is a particularly aggressive and deadly form of childhood cancer," De Santes said. "This is really important research and cannot happen without the support of Hyundai."

"Because of people and organizations like you, we will be able to use the word 'cure' when we talk about childhood cancer, because one child with cancer is too many," said Kristi Rufener, whose daughter, Charlotte, was diagnosed with neuroblastoma when she was four months old. Charlotte, whose family lives in nearby Belleville, is now 19 months old and her cancer is in remission.