Madison, Wisconsin - Winning the "State Cow of the Year" award at the 2014 World Dairy Expo on Oct. 3 was only the second-biggest thing that happened while the Peterson family of Cashton was in Madison that week.

The most important came a few days later, on the west side of the University of Wisconsin-Madison campus, when stem cells from Kurt Peterson's bone marrow began flowing into the blood stream of his brother, giving Scot Peterson, 45, a new immune system and a good shot of beating adult acute lymphoblastic leukemia (ALL).

"He's a man of few words," says Scot, of his younger brother, Kurt, 40. "But you know he really loves you to do something like this."

It's been a good news/bad news kind of a year for the Peterson brothers, who co-own the Coulee Crest farm in the rolling hills of Monroe County, and the state's queen of cows, Coulee Crest Nick Lorilynn. Guernseys are the caramel brown and white cows known for the richness of their milk. And Lorilynn won the crown because she, her mother, and one of her daughters have each produced 40,000 pounds of milk in a year.

The last weekend in June, the National Guernsey Association held its national convention in La Crosse. The Petersons hosted a tour of their farm and a dinner event for 475 convention goers at their farm. 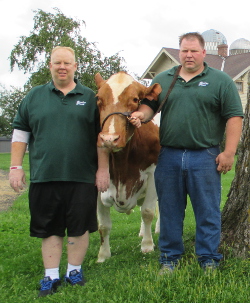 Scot Peterson, a burly guy who competed in Sweden for the world tug-of-war championship when he was younger, felt pains in his legs, odd bruises and general exhaustion.

"I thought I was tired from all the work of getting the farm ready," Scot Peterson says. He got through the convention and the national sale on June 30. That was another high point for the farm, with one of Lorilyn's daughters topping the sale at $19,000.

By the next day, there was bad news.

"By the middle of the day on July 1st, I was in the hospital, finding out my diagnosis of leukemia," he recalls.

His oncologist, Dr. Wayne Bottner of the Gundersen Lutheran Clinic in La Crosse, told Scot that he had a type of leukemia, ALL, in which the bone marrow makes too many lymphocytes, a type of white blood cell. ALL is more common and easier to treat in children. Adults fare better if they can find a match that allows them to have a stem cell transplant from a donor's bone marrow. And so Bottner referred Peterson to the UW Carbone Comprehensive Cancer Center in Madison.

Dr. Walter Longo, director of the bone marrow transplant program at Carbone, explains that siblings have a one in four chance of matching as donors. Luckily, both of Scot's siblings, sister Jill and brother Kurt were matches, but Kurt was a better choice.

The brothers have been close since Kurt's birth.

"I remember my mom and dad telling me outside the milk house that I was probably going to have a little brother on my birthday," says Scot. "He arrived the day before my fifth birthday, and he's been my little birthday present all my life."

On the farm, Scot Peterson specializes in the crops and the financial aspects of the farm while his brother Kurt tends to the cows. Scot is chatty, while Kurt is quiet.

"We stay out of each other's hair," Scot says. "For brothers, we get along pretty well."

As Scot Peterson was beginning his chemotherapy in July, the brothers got word that the Wisconsin Guernsey Breeders Association selected Lorilyn as the breed's top cow. And because the Cow of the Year honor rotates between the seven dairy breeds, and 2014 was the Guernsey's year, that meant she'd receive the honor at the Dairy Expo from state Agriculture Secretary Ben Brancel and Alice in Dairyland Zoey Brooks.

While Kurt and their parents, Don and Dorothy, were at the World Dairy Expo, Scot was at UW Carbone Cancer Center, having radiation, and then chemotherapy, to prepare for the transplant.

Meanwhile, the day after accepting the award at the expo, Kurt had the first of a series of daily injections that caused his bone marrow to send off stem cells into his blood. On the fourth day, he returned to Madison to give a blood donation, then his blood went through a machine that sorts out the stem cells. Scot then received an IV bag of his brother's stem cells, the beginning of a new immune system to fight the leukemia.

Dr. Longo says a blood draw at 90 days out from the Oct. 8 transplant should tell whether it is working, but the real test, he says, is to see Scot Peterson returning for checkups decades from now.

For his part, Scot Petersen is confident the stem cells from his brother, and farm partner, will do the trick.

"For me it's just a speed bump," he says. "You got to keep moving forward."