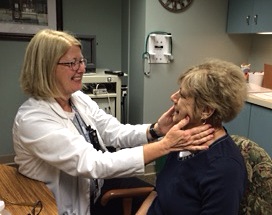 The Fort Atkinson woman needed to talk for her job as a student counselor at colleges that included Waukesha County Technical College and Edgewood College.

She thought the hoarseness was due to a sinus infection or allergies. Or possibly caused by acid reflux.

"You just think of things that aren't real serious," she says. "I ate right, and exercised and thought I was really healthy, although I did smoke."

Finally, though, she went to see a UW Health speech pathologist, Emerald Doll, who looked down her throat with a laryngoscope and didn't like what she saw.

From there, Klingbeil went to see Dr. Seth Dailey, who did a biopsy and determined that Klingbeil had cancer on her larynx and in a salivary gland deep in her soft palate. Next, Klingbeil became a patient of Dr. Aaron Wieland, an oral-cancer expert at the UW Carbone Cancer Center.

Wieland presented her case to the multidisciplinary head and neck cancer group and the treatment team prescribed a course of radiation and chemotherapy. Fortunately, Klingbeil was able to be treated close to home, at UW Cancer Center at Johnson Creek, where she received radiation treatments every day, for seven weeks

She gives high marks to her radiation oncologist, Dr. Jessica Schuster, and the rest of the Johnson Creek staff.

"They are just really caring nurses and doctors there," she says. "A really great group of people."

Between the cancer and its treatment, however, her voice was in really bad shape. So her final treatment involved a course of voice therapy with speech pathologist Kathleen Pazak at Fort Health Care.

Pazak says the chemoradiation not only dries the oral cavity and  larynx, but also weakens and stiffens all of the laryngeal structures.

"Even drinking water doesn't help," Pazak says. "Your throat is drier than dry."

But with weekly therapy sessions – "She even gives me homework," Klingbeil reports – her voice has made a comeback.

Pazak says that Klingbeil also had to make lifestyle changes to bring back her voice.

"Kathy had abused her voice for years with smoking and the vocal demands of her profession," Pazak notes. "So we had to identify and change her behaviors as well as improve the quality of her voice. She is a model patient, pleasant, motivated, making great progress and an inspiration."

Both therapist and patient are pleased with the progress.

"I never thought my voice would come back," Klingbeil says. "It's great!"

And Klingbeil has good reason to celebrate. She retired from her college career in June, is looking forward to spending more time with her four grandchildren, the youngest a toddler.

"I want to watch my grandchildren grow up," she says.

And now she'll have a voice to read them stories and to cheer at their games.