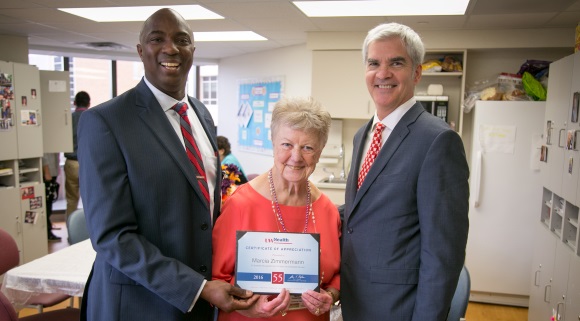 Back in September 1961, a new graduate of Madison Central High School went off to work at her very first job at University of Wisconsin Hospital and Clinics– and she's still here.

Marcia Zimmermann, a scheduler with the hematology/oncology clinic, celebrated her 55th work anniversary recently with a potluck and well-wishes from friends and leaders from the hospital and the UW Carbone Cancer Center.

"I enjoyed just about every day," she told hospital President Ron Sliwinski. "I would highly recommend working at UW Hospital to everyone."

Sliwinski noted that they shared a boss. In the 1960s when Zimmermann first worked at the old University Hospital building on University Avenue, the hospital superintendent was James Varnum. He later became the president of the Dartmouth-Hitchcock Health system, where he was Sliwinski's boss for many years.

Zimmermann's first job was with the hospital admissions department. She worked there for five and one-half years before transferring to the Psychiatry Department, where she would spend the next 29 years. Psychiatry was then located in the infirmary, but later moved to a nearby building on Lorch Street.

"I worked with a wonderful group of doctors," she says, remembering that when she first met current chairman of psychiatry Dr. Ned Kalin, he was a young resident.

Another co-worker from that time was Judith Faulkner, who went on to found Epic Systems, the health software company. Zimmermann recalls that she and Faulkner, who was then a graduate student, would work through large piles of paper to get patient records and billings  computerized. Today, software from Epic takes care of those challenges.

After 29 years with psychiatry, Zimmermann moved over to the cancer center, where she has worked ever since.

And don't ask her about retiring, either.

She took the time to help her husband, DuWayne, recover from cancer treatment. When he was better, she went back to work. The couple will soon celebrate their 50th wedding anniversary, another important milestone.

"They're like that cute old couple who hold hands all the time," reports daughter Kendra Zimmermann. "I've never seen them angry at each other or heard them fight."

The family previously owned the Zimmermann TV Sales and Service shop and DMK Woods shop in Cottage Grove. And Kendra, with skills she began learning in the family businesses, is now a metalworker with Custom Metals, which is doing a lot of work on the Epic Systems Campus. The giant horse-shaped weathervane above the Epic barn building is her work.

As for Marcia Zimmermann, she says she's enjoyed all the learning and new people that 55 years working for the hospital brought into her life.

"I've really met a lot of nice people," she says, "and made a lot of friends."