That’s the theme of the UW Carbone Cancer Center’s Fall Cancer Conference, which takes place Friday, November 1 at the Monona Terrace in Madison.

The annual event brings together clinicians, researchers, patients and members of the public for a day-long series of workshops and learning opportunities, all focused on rural cancer care.

“Where you live should not affect your outcome from cancer,” said Dr. Noelle LoConte, an associate professor of medicine at the University of Wisconsin, and member of the UW Carbone Cancer Center. “It is well documented that rural cancer patients don’t have as good of outcomes as non-rural patients. We thought we could unpack the why to this finding, but also the how.”

Topics covered will range from how to strengthen the patchwork for rural cancer screening to the strengths and challenges of caregiving in rural areas.

The conference will also feature a keynote speech from a guy who knows a thing or two about rural health in the state. 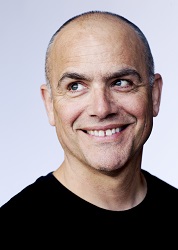 Michael Perry is one of Wisconsin’s best known humorists and authors. He’s also a trained nurse, an EMT and a volunteer firefighter serving a rural area. This unique blend of experiences, he says, allows him to find relatability on a very human level.

“I don’t present myself as a medical expert or a cancer expert or a rural health care expert,” Perry said. “But when I talk, I try to use a mix of humor and heart and weave those threads through what I’m doing, whether it’s telling a ridiculous story about my brother looking for health care at Farm and Fleet or whether it’s talking about some of the heavier things.”

While Perry entertains readers in books like “Population: 485 – Meeting Your Neighbors One Siren at a Time,” his writing often shines a light on some of the challenges that rural residents face, especially when it comes to health care.

“As a first responder, I’m part of the team that is often the first point of entry into the health care system in a rural area,” Perry said. “That’s not necessarily a good thing, but I’m there to witness it.”

Distance to care, availability, and cost are all challenges that Perry cites for rural residents. When cancer care means a six hour round-trip in the car, as is the case for one of Perry’s neighbors, it’s easy to see why some forego care altogether.

There’s also the stereotypical image of the stoic, rural resident who refuses to ask for help, especially when it comes to health. Perry says there’s some truth to that, and related a story about his brother’s father-in-law, a self-employed workaholic who one day told his wife of many years that he felt too sick to go to work. Never having heard this from her husband before, she knew something was very wrong and called an ambulance.

“It turned out he was having a heart attack,” Perry said. “And that’s kind of in a nutshell that whole mentality. He didn’t come down and say ‘I’m having chest pains,’ he didn’t say ‘I better go to the hospital.’ He just said ‘I just feel too sick to work’ and his wife dialed 911.”

Perry’s no stranger to that stoicism himself. Faced with self-insurance and a high deductible, the decision to seek care isn’t always straightforward. “I do know what it is to have a sick child, and rather than just pack the kid up and go straight to the hospital, to call around,” he said. “We know we’re going to pay for it.”

Fortunately, in one recent instance, Perry trusted his gut when he sensed something unusual with his own health. After some initial hemming and hawing over an unusual bump on his neck, he made an appointment to get it checked. Turns out the bump was squamous cell carcinoma, the second most common type of skin cancer, which can be caused by too much sun. Thanks to early detection and quick action, Perry was able to have the cancer treated. He considers himself lucky, but knows there are others who wouldn’t have made the same decision.

“I think about people who…aren’t privy perhaps to the education I had, and then also have these other reservations, whether it’s stoicism, whether it’s finances or whether it’s distance,” he said.

It’s these challenges, and more, that will be discussed on November 1. A full conference agenda, and information about registration, can be found here.

For his part, Perry says he’s looking forward to speaking at the Cancer Conference, which gives him an opportunity he doesn’t get every day.

“I can throw out a couple of medical terms that I paid for back in the ‘80s when I got my nursing degree and they’ll know what I mean,” he said.