The reunion began with subdued clapping and cheers. (Quietly, of course, so as to not disturb the other patients and families resting and recovering in UW Health's Burn Center).

A dozen of the center's staff – many who have worked at UW Health for at least a decade – quickly consumed Paul and Brenda Gard, catching up, sharing a slice of cake and trading hugs, gifts and photos.

Paul and Brenda Gard will celebrate their connection with the Burn Center when they drop the puck at the Blake Geoffrion Hockey Classic on June 18. Purchase tickets

Paul Gard spent 99 days here in 2006, recovering from a work accident that left 46 percent of his body burned. He and his wife, Brenda, come back often, on the anniversary of his stay and on holidays, sending care packages in between.

But this was a special visit, marking the 10-year anniversary of the three-month stay that led to Paul's rehabilitation and a lifelong bond between the couple and their recovery team.

A Horrible Accident at Work

Brenda sent Paul off that Sunday night with a kiss and a wish for him to be safe, as she always did. It was at the foundry in Waupaca where he worked that Paul slipped and fell, landing in molten steel that had spilled on the ground. He was rushed to the local hospital, and then transported to Madison, where Burn Center doctors diagnosed second- and third-degree burns on his back, legs and arms.

Paul doesn't remember much of those first few days. Brenda still vividly recalls details from that night: a police officer knocking on her bedroom door to relay the bad news; ambulance drivers squeezing her shoulder in support; seeing much of her husband's wounded body wrapped in white bandages. She also says she knew right away they were in the right place for her husband to heal.

It didn't take long for the Gards to develop a connection with the Burn Center's doctors and staff.

"They were so nice and friendly, and always made me feel comfortable," Paul remembers. "I felt safe. I felt at home."

A Summer in the Burn Center 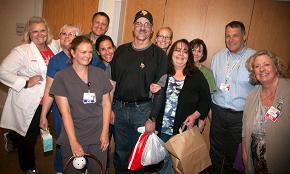 Paul spent the summer in the Burn Center, with Brenda at his side. Friends and family made frequent visits, including their three children.

Remembering how the Gards made it through that long summer, many on staff describe Paul as dedicated and hard-working, and Brenda as the ultimate advocate and partner: always positive and encouraging.

"They both had such a great attitude," says Connie Handel, RN. "It was a difficult time. He was in pain, and they were away from their kids, but they both stayed so focused on Paul's recovery."

Brenda says the feeling is mutual.

"They are like family. They were all part of our recovery, and they changed our lives."

After more than three months, Paul was finally ready to transfer to rehab. As a surprise, the staff – lead by now-close friend Luke Markus, RN – swapped out Paul's cherished Minnesota Viking memorabilia for green and gold and hosted a Packers tailgate party, part of the friendly rivalry built during Paul's recovery, and a source of humor in a difficult time. (The Gards have returned the favor many times over by now, sending Vikings-themed gifts back to the unit.)

Brenda says it's vital to her and Paul that they remind the unit just how much they mean to their patients, not just for wound care, but by setting goals, explaining what's happening – while avoiding information overload – and, most importantly, smiling and lending an ear.

"The whole unit came together to help us learn to live our life again," she says. "They were amazing."

Who is the Burn Center?