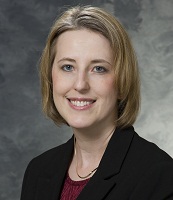 Madison, Wisconsin - Since 1927, mammography, a special form of X-ray breast imaging, has helped diagnose and screen for breast cancer—by catching a tumor early with a mammogram, it can often be treated effectively before spreading to other organs.

But with President Obama announcing his precision medicine initiative in January 2015, breast imaging is becoming an increasingly important tool for cancer treatment as well.

"Imaging can help us tailor the treatment to the exact biological properties of a tumor," says Amy Fowler, MD, PhD, an assistant professor of radiology at the UW Carbone Cancer Center. "This may not only reduce the risk of cancer recurrence at the primary site, but also the risk of metastases."

A prime example for precision medicine is Fowler's research toward improving the success rate of hormone (endocrine) therapy after the surgical removal of a breast tumor.

The typical path from cancer detection to surgery starts with a mammogram followed by a biopsy-based diagnosis that classifies the tumor as hormone-receptor-positive or -negative. About 70 percent of newly diagnosed cancers are positive, meaning they may respond to hormone therapy.

In the future, Fowler hopes that these 70 percent of patients will receive a short course of hormone therapy right after the biopsy, before the surgery is performed, to evaluate the tumor's response.

"We will inject a radioactively labeled compound into the patient's vein," Fowler explains. "About an hour after the injection, we will obtain an image of the tumor's uptake of that compound with positron emission tomography (PET), using equipment similar to the more familiar computer tomography (CT) machine."

Doctors will no longer have to guess, based on average treatment statistics, whether or not hormone therapy will reduce a patient's recurrence risk after the surgery; instead, the PET image will help them predict that specific patient's response much more precisely.

In the Breast Center, where Fowler helps care for breast cancer patients, she also screens asymptomatic women at average and increased cancer risk.

A lifetime risk exceeding 20 percent, based upon a computer model that accounts for family history and personal risk factors, makes a woman eligible for annual screening breast MRIs (magnetic resonance imaging), in addition to mammography.

The primary screening tool for women whose lifetime risk is below 20 percent is a clinical breast exam. However, the age at which a mammogram should be added to this screen is surprisingly controversial.The American College of Radiology endorses annual mammograms for all women starting at age 40 in order to save the most lives. In contrast, the U.S. Preventive Screening Task Force recommends a start age of 50 followed by a mammogram every other year.

"Recent studies show that some 6,500 additional women in this country would die from breast cancer each year if those between 40 and 49 years go unscreened and those 50 to 74 years old are only screened biennially," Fowler says.

Another controversial topic concerns the disclosure of dense breast tissue in the letter that informs a woman of her negative mammography result.

A mammogram may miss a tumor when breast tissue is extremely dense, rather than fatty, but Fowler says there is not yet any clear guidance on the type of supplemental screening these women should receive.

Controversies aside, however, Fowler says UW Health patients can be sure of one thing: "The multidisciplinary approach to patient care that involves surgeons, medical and radiation oncologists, geneticists and imaging experts is a particular strength of UW Health. Our patients are very fortunate to have access to all of these resources in one place."