Bowlin' for Colons Brings Families Together

Bowlin' for Colons Brings Families Together 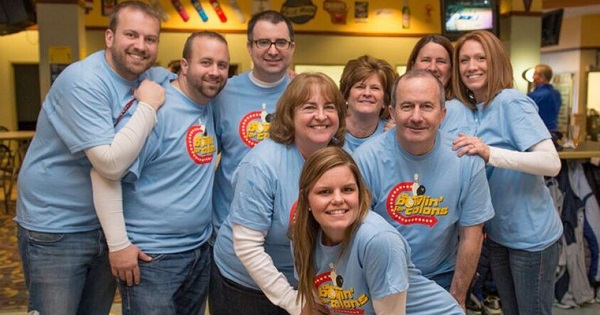 Louise Behling passed away in 2006 of colon cancer, but she’s still bringing together the people who loved her – and the party continues to grow, year after year.

Ryan Behling remembers that it was March 2006, just weeks after his mother’s death, when his family decided to participate in their first Bowlin’ for Colons. Their team of six had such a good time that they decided to do it again the next year. The group grew to 15, then 30, and this year they’ll bring more than 150. In fact, their team has so many participants that they take over every single lane at Ten Pin Alley near Verona for the morning session of the bowling fundraiser.

“It draws people from every aspect of mom’s life, from her childhood friends, to family, to my work friends and friends from the UW Carbone Emerging Leadership Board,’’ says Behling, a Madison Wealth Management Advisor at Merrill Lynch. “It’s sort of like a wedding, it brings people together.”

And because the date, which always falls on the first Sunday in March, is usually close to the birthday of Louise’s husband Dr. Ronald Behling, they typically stay at Ten Pin to celebrate that, and to watch Badger Basketball together.

Behling says it’s a fitting tribute to his mother, who grew up in an Irish-Catholic family of 11 children and believed that bringing together family was the most important thing.

His mother’s death also changed the course of Behling’s life, leading him to get involved with the UW Carbone Cancer Center, first as a member of the Emerging Leadership Board, and now as a member of the Advisory Board. It also lead to a discovery about his own health.

Start Your Own Tradition

Register today for Bowlin for Colons

“Because my mother died of colon cancer, I had my first colonoscopy when I was still in my 20s and discovered I have Crohn’s disease,’’ says Behling, who did not have the typical symptoms of Crohn’s. “I don’t know how long it would have taken to discover it, but it’s now under control with medication, and that was a really awesome outcome.”

Behling says he appreciates knowing about the innovations Carbone is making in colon cancer, noting that he just recently learned about Dr. Noelle LoConte’s Milwaukee project to get more people from minority groups to have colonoscopies. And he enjoys hearing about the success of Bowlin’ sponsor Exact Sciences, and its innovations that will help bring colon cancer screening to more people.

“Having a test that is noninvasive should really help more people get screened,’’ he says.

His mother died before Ryan and brother Ross had children, but he thinks she would be tickled to know that there are now three granddaughters who will be on hand for the 2018 event. The passion for colon cancer research has reached a new generation.

“One of my young cousins won’t go bowling without wearing one of his Bowlin’ for Colons T-shirts,’’ says Behling. “It’s just a great cause that everyone can get behind.”