Betty's Art: A Source of Inspiration and Healing

Betty's Art: A Source of Inspiration and Healing 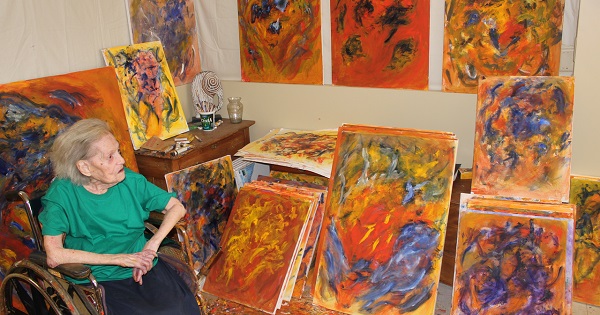 When Betty Lencer, 88, comes in for her regular appointments with neurosurgeon Dr. Robert Dempsey, he gets a visual update on the direction of her abstract expressionist paintings.

"I always know what she's working on based on the color of the paint on her wheelchair,'' he says, noting that lately she's been in "an orange period."

The two met a decade ago, when she came to Madison to have surgery on a meningioma, a type of brain tumor. They bonded over their love of literature, especially William Faulkner and W.B. Yeats. And when Dempsey sees her wildly colored paintings, he sees something he wishes for all his patients.

"Art inspires her and keeps her young,'' Dempsey said, at a recent show of her paintings. "Art is very healing. The first rule of medicine is that for healing, patients should be full participants in their life, and in their healing. Betty has lived a long and fascinating life, and her art is what connects her to her past and her future.''

Betty grew up in Philadelphia, and remembers her father traveling to Spain to fight against Franco and the fascists in the 1930s. In the next decade, she was an ardent supporter of the newborn state of Israel.

"I might be the only person you'll meet who has been a Bolshevik, a Zionist and a Freudian,'' she says. 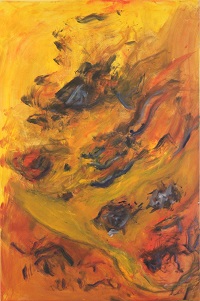 Early in her painting career she had lessons with the famed abstract expressionist Hans Hoffmann. His paintings hang in museums ranging from the Guggenheim to the Chazen here in Madison. He was an inventor of an artistic approach he called "push and pull," something that Lencer still uses to create her swirling imagery.

"I remember him looking at my painting and saying, 'You push-pull very well, but now you've got to pull it all together,''' Lencer says. She also took art classes at Brooklyn College.

Her daughter, Tamar Kusmin, can't remember a time when her mother didn't paint; it's an avocation that she has pursued during a bohemian life that took her from locales as diverse as the East Village of Manhattan, Provincetown on the tip of Cape Cod, Berkeley, and Woodstock, N.Y., during the time of the iconic Woodstock music festival.

In addition to her art and her reading, she's known as the author of witty limericks (the 2016 presidential race was a source of much humor) and even appeared as a contestant on Jeopardy in the 1970s.

Kusmin remembers her non-traditional mother taking her two small children to Europe on a low-budget but exciting trip to look for goods to resell in her leather shop.

"We got to Greece just in time for the 1967 coup, and everything was shut down,'' she said. "We were literally the only people on the entire Acropolis."

Lencer was living in New York City a decade ago, when she woke up suddenly unable to speak or remember, symptoms of a tumor pushing on the speech and memory areas of her brain. She moved to Madison to be with her daughter, son-in-law David Elderbrock, and two grandsons.

Today, after two open craniotomies; radiosurgery with Dr. Steve Howard, of radiation oncology, for tumors that couldn't be surgically removed; and treatment for breast cancer with Dr. Mark Burkard, she's a resident of the nursing home at Oakwood Village. A broken hip and a bad knee have caused her to use a wheelchair, but haven't stopped her from painting. Sometimes she'll get up in the middle of the night, to "push-pull" oil paint across the canvas, using Bounty paper towels instead of a brush.

"It has to be Bounty,'' reports Kusmin, who shops regularly to keep her mother in art supplies.

Her room at Oakwood Village is splashed from ceiling to floor with the brilliant cadmium reds and yellows.

Dr. Jerry Hisgen, a retired physician who works as an ombudsman for patients at Oakwood, remembers discovering Lencer the artist about five years ago, as he was making the rounds at Oakwood Village.

"I could smell the oil paint,'' he says, "and I walked into this room filled with art and met the most charming lady."

They became fast friends, and when Hisgen learned that Lencer had never had a show of her work, he decided to help organize one. He enlisted Madison fine-arts photographer Jim Barnard and his artist wife, Barbara, to help curate and price the show. Her son-in-law, David Elderbrock, put together a catalog of her more than 200 paintings. 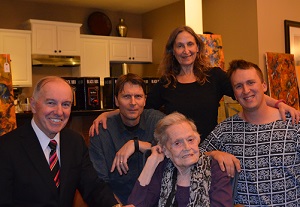 And on a warm night in October, Lencer's friends, family, doctors and more gathered for a look at the paintings, displayed together in gallery style. Her earlier paintings have figures reminiscent of Matisse, while the more recent ones are pure abstract expressionism, but conjure feelings of birds, fish, people, mountains and trees.

"Bright light from the sun enhances the beauty of her palette and textures,'' says Hisgen. "The net result is a warm and soothing feeling of pleasure."

Some of the paintings sold that night, and Lencer decided to donate part of the proceeds to support neurosurgery research and global health.

"Betty has a very global view, and she's interested in the work we're doing to train neurosurgeons in the developing world,'' says Dempsey. "She also knows that we need to do better in treating brain tumors, and that we can always find better ways.''

Her family believes that the medical care she has had at UW Health, plus her commitment to her art, is what kept her going through all her health challenges.

"She has always painted,'' says Kusmin, "and I'm certain she has kept her vitality and love of life thanks to the joy she gets from painting."