Believing in a Future Without Cancer

Believing in a Future Without Cancer 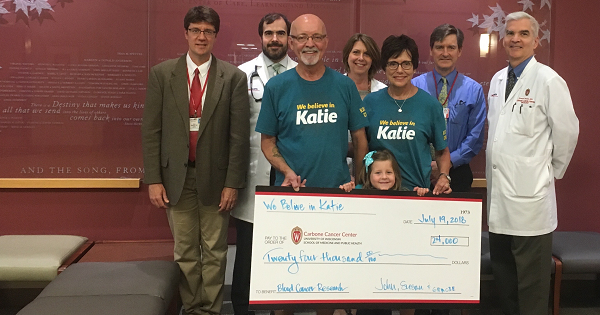 In July 2015, Susan Udelhofen received a call from her 31-year-old daughter that no mother wants to receive.

“She said, ‘I’m in the emergency room in a lot of pain but it’s probably just a virus.  I’ll call you tomorrow.’”

The next day, Katie did call but to tell her parents she wasn’t better and something felt very wrong. She asked her parents to fly out to Baltimore where she was living and working as a social worker. They flew out immediately.

“After several days and sending her labs to a physician friend in Madison, I became a pushy mother,” Udelhofen says. In the middle of the night we got her transferred to Johns Hopkins where, within a few hours, they had her diagnosed with ALL [acute lymphocytic leukemia, a blood cancer].”

Susan and her husband John moved to Baltimore to support Katie and Katie’s family – her husband and two-year-old daughter. Katie began treatments, and after two rounds of chemotherapy and a recently approved immune therapy drug she finally went into remission, which enabled her to have a bone marrow transplant from her brother, Brian, in February 2016. The transplant failed, and in May of that year the cancer returned. Her physicians had exhausted all treatment options and in June, Katie and her parents returned to Madison, Katie’s hometown.

“She had a list of things she wanted to do, and we did most of them in the three weeks before she died Susan says. She was 32, left a young daughter and changed our lives forever. Her physical presence is so deeply missed.”

A few months after Katie passed away, one of her high school girlfriends asked Susan to meet for a glass of wine. She suggested honoring Katie with a birthday benefit to be held the next spring near her birth date. They hoped to raise $5,000 and fund both a scholarship in Katie’s name at Verona Area High School (VAHS), where Katie attended, and donate toward a “wish” for one child through Make-A-Wish. That first year, they raised $18,000. Happily surprised by the success, Katie’s parents worked to form a non-profit, which they named ‘We Believe in Katie.’

“Believe was her ‘word’ “ her mom says. “Katie believed in the goodness in people and being kind. She lived by the quote, ‘Everyone you meet is fighting a battle you know nothing about. Be kind. Always.’ That’s the essence of who she was.”

Fast forward to today. We Believe in Katie has held three main spring fundraising benefits. They also raise money through other means, such as the wine glasses Susan paints and sells, or when Katie’s brother ran a half marathon and raised funds for their charity. They have funded three scholarships to a VAHS graduate and granted five Make-A-Wish wishes. But it was also important to Katie’s family to fund research, because, as Susan says, “Maybe there’s a Katie out there who will be saved because of it.”

Katie’s childhood friend, Ryan Behling, is a member of the UW Carbone Community Advisory Board, and he connected Susan and John to UW Carbone Cancer Center researchers. One of the doctors she met was hematologist, Aric Hall, MD.

Dr. Hall talked to us about what it is like to treat young people with hard-to-treat diseases like Katie had,” Udelhofen says. “He has such a big heart. He spoke at our benefit this past April and explained that often those hard-to-treat adults get forgotten, and efforts instead go to those who have a higher chance of surviving. But that wasn’t Katie and others like her.”  He said, ‘We shouldn’t give up on those people.’”

John and Susan learned of a clinical trial that Hall was looking to open, to serve people who have high-risk blood cancers, like Katie had. We Believe in Katie is now partially funding this trial. The same funding is helping with a parallel trial, led by UW Carbone and American Family Children’s Hospital pediatric hematologist Inga Hofmann, MD. Hofmann’s trial will be open to children and adults with non-cancerous blood diseases.

“We’re here because of Katie’s life and her death from leukemia,” Her mother says. “Do I wish Katie would have been saved? Or course. But we feel that our nonprofit brings deeper meaning to Katie’s life, raises awareness and gives back.”

Clinical Trials Supported by We Believe in Katie

One of the best treatments available for patients with blood cancers is a stem cell transplant. In it, the patient’s immune system is wiped out by chemotherapy, then a donor immune system replaces it. The goal is two-fold: the new immune system should attack the cancer cells (but not attack the healthy cells) and provide a lower risk of infection.

“But stem cell transplant is always a fairly dangerous procedure. And despite those risks, it unfortunately does not often work for patients with high-risk disease,” says Aric Hall, MD. “The trial we’re working on is trying to do transplant in a new way that will hopefully give patients a better shot.”

In Hall’s trial, the donation starts the same way as currently done. However, the subset of cells thought to be responsible for the worst side effects – the alpha/beta T cells – are removed. This same procedure is being used in a clinical trial for pediatric blood cancers and solid tumors at American Family Children’s Hospital, with early success.

Inga Hofmann, MD is building on their success of treating blood cancer in children with a similar approach to treat children and young adults with non-cancerous blood diseases such as aplastic anemia.