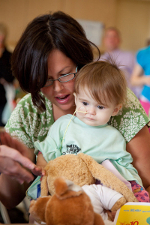 They showed them to the young patients at American Family Children's Hospital, who enjoyed playing with the heavy discs that shimmered in the sunlight.

Once upon a time, they had been the kids in the hospital - each of them received a life-saving liver transplant.

"I remember what it was like being here," said Hendrickson, a 16-year-old who received a transplant when she was eight.

That helps to explain why the Verona High School junior wanted to be involved in a program to distribute stuffed animals to children at the hospital.

Fellow youth competitors created the stuffed bears, bunnies and puppies during a trip to Build-A-Bear on Kids Day at the Transplant Games, which were held in late July and early August in Madison. The children wrote a note about themselves that stayed with the plush toys, which each sported a pint-sized Transplant Games t-shirt.

The idea for the program - which was sponsored by American Family Children's Hospital - came out of the local organizing committee for the Transplant Games, according to Trey Schwab, an outreach coordinator for the UW Health Organ Procurement Organization.

"They're always looking for ways to get the pediatric recipients a little more involved in the Games, and I think it was a great way to do that."

Hendrickson helped children pick out stuffed animals - the bunnies were a popular choice - along with Wandschneider, 11, and Joachim, 10. All three smiled, laughed and played with the young patients and their family members.

"I just like giving back to a place that's helped me so much and saved my life," said Hendrickson, who earned two medals in track and field at the Games. "And the kids, I want to make sure they're happy and they get better."

Joachim, a fifth-grader from Lodi who won five medals in track and field at the Games, was five when he received his transplant. He and Hendrickson both recalled cuddling up with many stuffed animals during their time in the hospital.

"It helped a lot to have something you could hug when you needed it," Hendrickson said. "To be able to give back a little bit is nice."

Wandschneider, a sixth-grader from Waunakee who claimed medals in cycling and badminton at the Games, was only three when she received her transplant and has very few memories of being in the hospital.

Asked why she wanted to be part of the stuffed-animal program, she said succinctly: "I really like helping the kids."