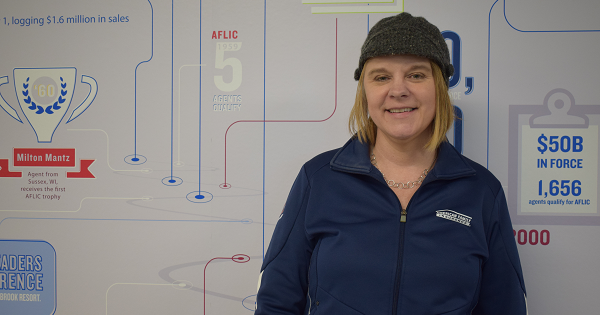 “I think having that positive frame of mind is probably the best thing you can do.” – Michelle Voigts

For most people, hitting a deer at 55 miles-per-hour on the drive to work would be an event you’d probably like to forget about.

But Michelle Voigts isn’t most people. And she’s not forgetting about this experience anytime soon.

On a September evening in 2019, she found herself at urgent care, being checked out for whiplash after hitting the deer on her morning commute. While she wasn’t injured in the crash, and did end up going to work that morning, she started feeling symptoms as the day progressed. That prompted her to come in for care, where a doctor ordered a CT scan – something that just may have saved her life.

The results of the scan showed an egg-sized growth on Voigts’ brain. It was unexpected news, but Voigts considers herself fortunate that the growth was found when it was. “I hit that deer for a reason,” she said. “If I hadn’t gone to urgent care, I have no idea when my symptoms would have shown up, and if it would have been too late.”

Plans were made to get her into surgery as soon as possible, and less than a month later, surgeons performed a craniotomy on Voigts to remove the growth. She estimates that they removed about one-sixth of her brain.

After surgery, a tissue sample from the growth was sent off for testing. A week later, the results came back as a grade III glioma. Gliomas are tumors that occur in the brain and spinal cord, and the higher the grade level, the more likely it is that tumor cells have spread into nearby healthy tissue. This brought her to the UW Carbone Cancer Center for further treatment.

She first met her oncology team in late October and was put on an aggressive treatment plan, including several weeks of radiation and chemotherapy. Fortunately, her specific type of cancer demonstrated certain traits and markers that made it easier to target.

Since having the surgery and going through treatment, Voigts says there have been good days and bad days, but she’s taking it all one day at a time. Throughout it all, her positive attitude shines through. “Even on a rainy day, there’s hope,” she said. “That’s where my positivity has been coming in, just being appreciative to each day that you’re given.”

Exercise has also given her an outlet to deal with the physical and emotional challenges of cancer treatment. Prior to her diagnosis, Voigts stayed pretty active. And despite frequent visits to the clinic for treatment, undergoing physical therapy, and experiencing various side effects, she was determined to stick to her running regimen. “I continued to still try and exercise as much as I could during that timeframe,” she said. “Rest was really good for me, but to make those headaches go away, I noticed that being physically active really helped.”

Voigts had planned to participate in UW Carbone’s Race for Research, the annual 5k run/walk that funds adult and pediatric cancer research. However, due to COVID-19, this year’s event has been cancelled. Voigts said she was bummed to hear that news, but completely understood, and now looks forward to the event returning on Saturday, June 5, 2021.

She wanted to participate in Race for Research, in particular, for many reasons. Her employer, American Family Insurance, partners with UW Carbone to put on the event, and she cites them as one of the big reasons she decided to sign up. “I’m very proud to work for a company that’s been so supportive of me,” she said.

She was also interested in advancing research – especially brain cancer research – so that future patients don’t have to go through what she’s had to go through. “They have treatments now but they’re not kind,” she said. “There’s got to be some other way of treatment that’s less difficult on people.”

In the meantime, Voigts will continue to be monitored by doctors. She’s currently on a high-dose chemotherapy regimen, but her situation is stable at the moment. She’ll remain under observation for at least a year, with an MRI taken every three months. “The biggest thing with a brain glioma is that it can reappear in a lot of cases,” she said. “But I’m not going to go there.”

Again, one day at a time.

If she does look to the future, it’s because she hopes that, with research, a lasting cure for this cancer can be found, so that people in her situation won’t have to worry every time they return to the clinic for an MRI. She also hopes that future treatments, regardless of the type of cancer, will be less disruptive, with fewer side effects and less hair loss.

Until then, she’ll keep trucking along with a smile on her face.

“I think having that positive frame of mind is probably the best thing you can do,” she said. “Even if you have the worst diagnosis, don’t think of it as a death sentence. Think of each day as a positive.”