Band Together to Beat Cancer

Band Together to Beat Cancer 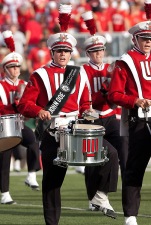 For information about the 2014 Band Together to Be Cancer initiative, visit uwhealth.org/beatcancer

Madison, Wisconsin - Music has the power to enliven, encourage, inspire and heal. It's no wonder, then, that an emblem of Badger spirit and tradition, the UW Madison Marching Band, is joining with the UW Carbone Cancer Center to Band Together to Beat Cancer.

On November 9, 2013, as the Badger football team faces Brigham Young University, the marching band will take the field wearing black sashes to show their support for cancer patients and their families. Between now and October 18, 2013, people can donate to have the name of a loved one placed on the sash a band member will wear throughout the day. Donors receive the sash after the game.

The uniform of each band member is worn with pride, but it's more than just a uniform. "It's unadorned," says band director Mike Leckrone, "and it signifies what we are as a group."

Yet, at the game, members' uniforms will be adorned for the first time.

Leckrone, now starting his 45th year at the helm of the UW Marching Band, is a Wisconsin icon. He, too, will wear a sash, because he is one of the band, and because he knows personally what it's like to fight cancer. Members of his immediate family have battled the disease and Mike himself was treated for prostate cancer at the UW Carbone Cancer Center.

But it is his focus on the band that frames his desire to help.

When the group met on a muggy late-August evening to discuss Band Together to Beat Cancer, Leckrone guessed aloud that despite their ages, everyone there had probably been touched by the disease. Looking up, he saw each head nodding in the unison.

"In that moment, I knew that every person there was thinking of a loved one who had faced cancer," says Leckrone. "If nothing else, this partnership will impact the 300 people in that room."

When the drums and horns take the field in early November they will do as they always do - enliven, encourage and inspire the thousands of fans to cheer the Badgers to victory.

And each sash worn by the band will have the power to inspire the thousands in the stands, and many more, to nod their heads in unison, thinking of someone they know with cancer--highlighting the common thread shared among them all.