Athletes Need a Good Night's Sleep to Fulfill Their Potential

Athletes Need a Good Night's Sleep to Fulfill Their Potential 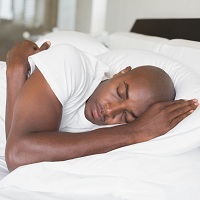 Madison, Wisconsin – Athletes striving to achieve peak results often look to what’s going on during the day to see if they can make performance-improving changes.

Training components such as workout routines and diet are integral to performance, but athletes who want to run faster or jump higher or generally play better may want to examine what they’re doing at night.

“We’re starting to recognize how important sleep is, particularly for high-performance athletes,” says Ruth Benca, MD, PhD, a professor of psychiatry at the UW School of Medicine and Public Health who helps people struggling with sleep disorders at Wisconsin Sleep.

Important because people who don’t get as much sleep as they need tend to lack concentration and attention. Their motor skills suffer, as well. In the realm of athletics, that means they may not be applying maximum focus to that free throw or running with an optimal, energetic stride as they go for a personal record in the half-marathon.

“Athletes have to allow enough time to sleep,” says Dr. Benca’s Wisconsin Sleep colleague Meredith Rumble, PhD, a UW School of Medicine Public Health psychologist who specializes in sleep and mood disorders. “Everyone’s sleep need is different. The average is seven to eight hours per night, but you have to figure out what you need.”

That can be tricky, because sleep-deprived people have a way of convincing themselves that their sleep habits are sufficient. Dr. Benca asserts that sleep deprivation is cumulative – the more sleep you miss, and the longer the deprivation endures, the worse off you are.

“If you keep shortchanging yourself, you get more and more impaired, even though you don’t perceive that’s the case,” Dr. Benca says. “People feel like they get used to a lack of sleep and are doing fine, but they decline in things like reaction times. You think you’re OK but you’re not.”

“If you think you’re getting enough sleep but compensating by, say, drinking a lot of coffee during the day,” she says, “maybe you’re not getting enough.”

So how can athletes make sure their “sleep hygiene” will bolster their performance rather than detract from it? Athletic participation itself is a good first step.

“People who are physically active generally sleep better, so we incorporate physical activity into a lot of the behavioral treatments for sleep,” Dr. Benca says. “If you’re an athlete or active person, that’s one step toward better sleep hygiene.”

Drs. Benca and Rumble suggest setting a consistent bed time each night, and sleeping in a cool room.

“Your core temperature drops during the night,” Dr. Benca explains. “People go to bed cold and wake up warm. Have covers on hand that you can add or subtract, so you can stay slightly cool.”

Stay in bed at least eight or nine hours. (Time in bed usually isn’t identical to time asleep.) Before turning in, you should also allow for a decompression period during which you apply yourself to only low-stress, low-activity tasks.

“You should give yourself time to let go of the day,” Dr. Rumble says. She recommends reading books – those tangible things that flip open at bound spines and have paper pages – rather than readers, because iPads and Kindles give off light that might tell your brain it’s not time yet to nod off. Non-literary temptations also abound when you read on electronic devices.

“If you’re on a device reading you might be tempted to check your email,” Dr. Rumble says, and email, particularly of the work variety, often have predictable consequences. “You can get all stressed out.”

Many serious athletes incorporate late-night training sessions into their regimens, but the elevated heart rates that accompany workouts may compromise sleep.

“The higher your heart rate goes, the higher your body temperature, and that can make it more difficult to fall asleep,” Dr. Rumble says. “Athletes need some time at the end of the day to decompress.”

And if you’re still having trouble getting a complete night’s rest that leaves you refreshed and ready for another day of competition or training? You may benefit from a strategy Drs. Benca and Rumble recommend for people who work irregular shifts. Napping in the afternoon can help both groups compensate for occasional periods of sleep deprivation.

If you continue to have sleep problems, call your primary care physician.