An Aspirin a Day to Improve Your Heart and Colorectal Health

An Aspirin a Day to Improve Your Heart and Colorectal Health

Madison, Wisconsin - Everyone knows that aspirin can ease headache pain, and quite a few people are aware of its long-term benefits for heart disease and strokes. 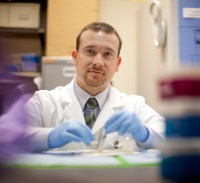 But until a recent review by the influential U.S. Preventive Services Task Force (USPSTF), few people pointed to aspirin as a colon cancer deterrent.

Count UW Carbone Cancer Center physician and researcher Dustin Deming, MD, as one of the many doctors now considering aspirin as a long-term care option for patients at risk for colorectal cancer. But as with patients who want to turn to aspirin for heart attack and stroke prevention, a physician should be consulted before using aspirin for prevention.

Not everyone, Dr. Deming says, should pop the top of their aspirin bottles if they're worried about colon cancer.

"In a summary of recent studies, the USPSTF has identified that aspirin reduces the risk of developing colorectal cancer and death from colorectal cancer 10 or more years after initiation," Dr. Deming says. "All patients over 40 years of age should discuss with their health care providers if they would benefit from a daily aspirin regimen."

The second part of that quote is as important as the first. Dr. Deming echoes the sentiments of the health care community in stressing the importance of talking to your doctor prior to turning to aspirin in the prevention of colorectal cancer.

What You Need to Know

That's because long-term aspirin use can increase the risk of bleeding, particularly in the gastrointestinal tract. Dr. Deming says such bleeding is "relatively uncommon," but that risk persuaded the USPSTF to include this statement with its review:

"The USPSTF recommends against the routine use of aspirin and nonsteroidal anti-inflammatory drugs (NSAIDS) to prevent colorectal cancer in individuals at average risk for colorectal cancer."

That language, in turn, demands a layman's translation. The USPSTF isn't contradicting its own review by recommending against the routine use of aspirin to prevent colorectal cancer. "Routine" in this context means without the consent of a doctor.

"It's for high-risk people, if they talk to their doctors first," said UW Health cardiologist Pat McBride, MD, MPH, FACC, in an interview on channel3000.com's Health Watch. He added that high-risk is defined as "people with a 10 percent risk in the next 10 years or more."

"With strokes it helps in much the same way it does for people with cardiovascular risks," said Dr. Bradbury. "The arteries become damaged and cholesterol and plaque can build up. The pipes that carry the blood get narrow, and this helps the blood get through and prevent strokes and heart attacks."

"Stroke risks and heart risks are really the same," said Dr. McBride. "We can use aspirin to decrease both risks."

But Drs. McBride and Bradbury added a word of caution similar to Dr. Deming's.

"It's really important people talk to their doctors because apirin may interact with other medicines. If people don't know they're at risk for bleeding, or at low-risk, this isn't going to help them," said Dr. McBride. "Please talk to your doctor first."

That conversation, both doctors stress, is worth having.

"We've seen a reduction in stroke by 70 percent in the last two decades, and a reduction in heart attacks by over 50 percent," said Dr. McBride, adding that while aspirin is a factor, it's not the only one. "It's people paying attention to prevention - eating better, taking their blood pressure medicine, their cholesterol medicine, exercising, doing all the right things."

It's also helps with "secondary stroke prevention - people who have already had a stroke or heart attack," said Dr. Bradbury. "It's saved millions of lives over the years."