Art as Rehabilitation at UW Hospital

Art as Rehabilitation at UW Hospital

Thanks to a grant awarded through the Wisconsin Arts Board and the National Endowment for the Arts, rehabilitation patients now have the opportunity to complement their customary regimen of physical, occupational and speech therapy with the hospital's new arts in health care program.

These sessions are led by Milwaukee artist and art educator Sarah Petto, who worked with UW Hospital and Clinics art coordinator Sarah Grimes to write the grant that funds the program.

"People who come through the rehabilitation unit are trying to get back into mainstream living again," Petto says. "It's a perfect match for what we're doing."

With support from rehabilitation therapists and hospital volunteers and under the tutelage of Petto, who moves from table to table to provide hints and suggestions, patients construct books expressing themes of their choosing.

"We asked the patients to come up with a personal theme," Petto says. "It helps them transform from someone who might describe themselves as recovering from an automobile accident to describing themselves as emerging artists."

Sixteen-year-old patient Meg participated in the most recent session. The Jefferson teen has been hospitalized for two months while recovering from a C-5 vertebra fracture she suffered diving into a swimming pool.

Meg's projects include cards for her physical therapist and for her brother, who was recently admitted to American Family Children's Hospital with a diagnosis of leukemia. Meg says she derives both physical and emotional benefits from the art sessions. 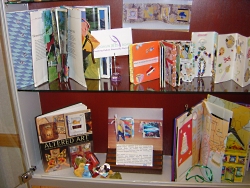 "It's fun and it's giving me strength," she says.

Rehabilitation therapist Kris Kravik says patients in the unit are often seriously injured, and the demands of their physical therapy sessions are great in terms of time and physical exertion. Art making provides a diversion in their routines.

"They don't get a lot of choices in their days," she says. "You have to go to physical therapy, to occupational therapy, to speech therapy. This gives them some control. They come down here and forget about other things in their day; they feel positive about making something."

Kravik found that she and many of her patients had to overcome similar obstacles at the program's inception. They were intimidated by the notion of working in a realm claimed by Henri Matisse and Pablo Picasso. But once they got started on their projects, their trepidation faded.

"They found an activity and thought, 'Oh, art isn't really that hard,' " Kravik says. "At first they would come down and say 'I'm not very artsy,' but they would find their inner artists and find it's not as intimidating as they thought it might be. It's been really positive."

The reaction has been uniformly positive, and Petto and Grimes plan to soon apply for more grants so they can expand the program beyond the acute rehab unit in the coming months.

For her part, exposure to the art sessions has compelled Kravik to reconsider her approach to therapy.

"It wasn't something that I used a lot in therapy," she says. "I did a lot more physical kinds of things. We now have all these supplies. It's something that I'll use more in therapy. We all learned that it's very helpful."