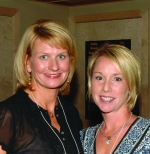 MADISON - The foundation for Ann's Hope Foundation was laid by two friends. After learning they were both runners, they began training for a marathon together. As the length of their runs grew, so did their friendship.

As Anne and Ann continued to talk about melanoma, they came to the realization that there is little awareness of the seriousness of melanoma. Anne had been thinking about ways to use running to raise awareness about melanoma. Meanwhile Ann wanted to create a foundation to help raise melanoma awareness and research funds.

When their ideas ran into each other, Ann's Hope Foundation was born. Soon special events such as the Annual Block Melanoma Run/Walk and an annual February gala event were created. Since beginning the Foundation in January 2005, the organization has raised more than $325,000 for melanoma research.

In 2007, Ann's Hope Foundation, Inc. pledged a three-year commitment of $75,000 annually for a total of $225,000 to the UW Carbone Cancer Center to support the work of Mark Albertini, MD who specializes in melanoma research and treatment.

Dr. Albertini's work is centered on the importance of T-cells in the immune response against melanoma. The overall goal of Dr. Albertini's research program is to provide an understanding of the immunobiology of human malignant melanoma as a means to develop effective treatment and monitoring strategies for patients with this disease.

The 2nd Annual Toast to a Cure will be held Friday, September 12 at The Brink Lounge in Madison. The cost to attend is $50 per person and includes wine tasting, appetizers, live music and a raffle. This year's event is in memory of Rebecca Swender who lost her fight with melanoma at the age of 36.