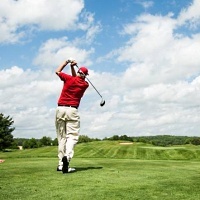 Madison, Wisconsin - Andy North and his friends, a star-studded list of athletes, raised $920,000 at the sixth annual Andy North and Friends dinner and golf outing on Sunday and Monday to benefit UW Carbone Cancer Center.

North is a skin cancer survivor who is committed to giving back to the cancer center. Tom Watson, Robin Yount, Annika Sorenstam, Bo Ryan, Jessie Vetter and Sherri Steinhauer were among the celebrities who participated in the event.

The UW Carbone Cancer Center was founded in 1973 as one of the first university-based comprehensive cancer centers as designated by the National Cancer Institute.

It is the only comprehensive cancer center in Wisconsin. More than 30,000 patients are diagnosed, treated and receive follow-up care or second opinions at the cancer center.