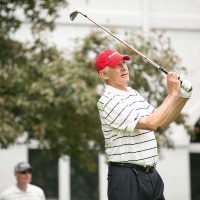 Madison, Wis. – Professional golfer Andy North and his friends raised more than $1 million for the University of Wisconsin Carbone Cancer Center at a dinner and golf tournament this week.

The figure includes money raised at an event at Wisconsin Aviation Sunday night by auctioning off items such as a trip to golf as North’s amateur partner in the Smith-Cole Invitational at Cherry Hills, the golf course near Denver where North won his first U.S. Open in 1978.

Over the past nine years, North and friends have raised more than $9 million for the cancer center. Two-time U.S. Open champion Andy North is an analyst for ESPN. He’s also a survivor of skin cancer and prostate cancer, and committed to supporting the work of the UW Carbone Cancer Center, where he received treatment.

Dr. Howard Bailey, director of the UW Carbone Cancer Center, said the support from Andy North has been invaluable to move research from Carbone labs to the patients who need it.

“This event provides seed funding for cancer research projects that lead to much larger projects,’’ Bailey says. “When times are tough for federal funding, they often won’t even consider a project unless you show the likelihood of success through a pilot study. So a $100,000 gift here can lead to a $2 million federal grant, and more quickly move cancer discoveries to patients who are suffering with cancer, not just here, but around the state of Wisconsin.”

A direct example, Bailey said, is that money from the North event helped Carbone researchers Dr. Ryan Mattison and Dr. Robert Jeraj launch a national clinical trial to use imaging to test whether novel clinical imaging could replace painful bone marrow to check on the status of leukemia.

The Andy North and Friends event has helped support UW Carbone pilot research projects on topics ranging from a novel therapeutic for head and neck cancer, a prostate-cancer vaccine and a study of follow-up care for breast cancer patients, among others.