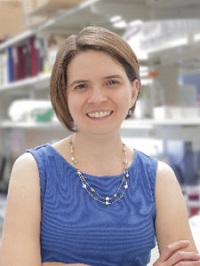 Ovarian cancer remains one of the deadliest female cancers — often diagnosed once it has already spread to other areas of the body.

Later diagnosis also means that researchers do not fully understand how these cancer cells metastasize. But, through her studies on tumor microenvironment of high-grade serous ovarian cancer, UW Carbone Cancer Center member Pamela Kreeger, PhD, is helping scientists get a better picture of the disease's progression.

"We don't fully understand what supports the metastatic process and what might inhibit the process," Kreeger said.

Cancer researchers, like Kreeger, think about the metastasis as a process with distinct steps: the cancerous cells must break away from the tumor, make their way to a new site, attach, and then remodel their new environment to make a supportive new metastatic home.

Her research group has mainly concentrated on those later attachment and remodeling steps, and they study the proteins that surround the outside of the cell, collectively referred to as the extracellular matrix.

"I think as an engineer, we actually think a lot about the outside of the cell because that's what we design and regulate," said Kreeger, an associate professor in the Department of Biomedical Engineering who was recently inducted into the American Institute for Medical and Biological Engineering College of Fellows.

Kreeger's lab wants to know how changing compositions and properties of the extracellular matrix might support the growth of the tumor and affect the way neighbor cells react to the tumor either through repressing the immune system or activating other cellular signaling pathways. 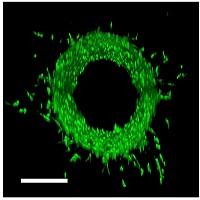 For example, her research group previously examined the levels of extracellular matrix proteins found in cortical inclusion cysts in patients with ovarian cancer or no sign of ovarian cancer. Her lab was then able to design a cell culture model mimicking the conditions inside the cysts, making sure the size of the cysts and the extracellular matrix matched what they had been seeing in patient samples.

"It's very difficult to recreate an ovarian cancer in an animal model and really difficult to track in a human at these early stages," Kreeger said.

Using this cell culture model, her research group found that fallopian tube epithelium cells would not stay inside the cortical inclusion cysts. Instead, these fallopian tube epithelium cells were able to invade the extracellular matrix surrounding the cysts, supporting other research that suggests these cells could be the precursors to high-grade serious ovarian cancer.

Since most of these cortical inclusion cysts go away naturally, Kreeger's group also studied the cysts as they transition from a larger structure to one with a tighter curvature in the cell culture model. Her lab found that changes in the curvature of the cortical inclusion cysts influence the ability of fallopian tube epithelium cells to break out from inside the cysts. Her lab collaborated with fellow UW Carbone member Jacob Notbohm, PhD, on these studies.

"We speculate that the cells might be able to be restrained in normal cysts, but if the matrix is wrong or they get a certain stimulus, they're propelled to go to start invading," Kreeger said.

Next, her research group plans to further explore how the extracellular matrix of an early tumor would influence the conditions that cells will detach. They are interested in whether an early tumor might detach as single cells or an aggregate of cells, and whether that might affect its ability to migrate and find a new tissue to call home.

"My lab is really trying to integrate and apply technologies to be biologically relevant," Kreeger said.