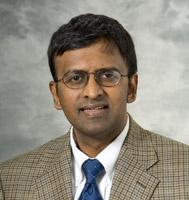 Madison, Wisconsin - Stroke recovery can be long and difficult. But a new stroke rehabilitation device may speed recovery and improve function for some of the 800,000 people in the United States who suffer strokes each year.

Currently, stroke rehabilitation uses of a functional electrical stimulation (FES) system that automatically activates nerves in paralyzed portions of the body without the use of brain activity.

"When patients use our device with an electrode cap and a computer, we ask them to imagine or attempt to move their hand," says Prabhakaran. "A brain-control interface translates that

brain activity to a signal that triggers the FES which activates nerves in paralyzed extremities."

The results of a clinical trial were presented at the Radiology Society of North America meeting in December. The trial involved nine patients, each with one hand affected by stroke. They underwent nine to 15 rehabilitation sessions for up to three hours. The sessions lasted over a period of three to six weeks. Before, during and after the rehabilitation period, patients also underwent functional magnetic resonance imaging (fMRI) and a second type of MRI (diffusion tensor imaging) that maps the rate that water diffuses between cells and provides a detailed map of the brain.

"The fMRI is able to show which areas of the brain are activated when someone performs a motor task," says Prabhakaran.

Prabhakaran explains that the researchers discovered some surprising results.

"We see brain changes in using this device over time as well as changes in the functionality of their arm, hand strength, and activities of daily living. Some participants said their mood and ability to communicate improved."

The researchers hope to study 40 stroke patients with upper extremity paralysis during the clinical trial. Prabhakaran hopes one day the device will be used as the standard of care for stroke recovery in a clinical setting or even used by patients on laptop computers or tablets.