A Personal Journey: Putting Sport Psychology to the Test

A Personal Journey: Putting Sport Psychology to the Test

UW Health Sport Psychologist Shilagh Mirgain, PhD, recently traveled to Africa to accomplish a 20 year dream. She shares her personal reflections of her journey in the following post. 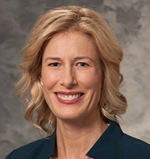 Madison, Wisconsin – Twenty years ago, I met a group of women in their early forties who were planning to hike Kilimanjaro, and they invited me to train with them, even though I could barely keep up.

I loved their energy, enthusiasm for life and put Kilimanjaro on my bucket list as I wanted to become exactly like them.

They sent me a postcard from the mountain, which I’ve had on my refrigerator the past twenty years and often gazed at it saying, "One day I would get there and hike to the top."

The dream of climbing this mountain never left me.

Preparing for the Future

Eight years ago, I bought hiking boots asking the salesman if they would be good for Kilimanjaro and started hiking in them. January 1, 2010, I wrote as a New Year's resolution to start training for this hike and started finding places to hike. Two years ago I joined a gym and started exercising most days of the week to improve my level of fitness. This summer I booked the trip and started a specific training program for my hike that involved climbing stairs with a weighted backpack, running, strength training and hiking.

This January - 2016 - I flew to Tanzania to pursue this twenty-year dream. My head guide, Edward, on the nine-day hike up Kilimanjaro, said that his people, the Masai, go to the mountain to seek God and pray for blessings for their lives. He encouraged me to not focus on getting to the top during the hike, but rather to enjoy all aspects of the mountain and to experience what I came there looking for.

Before I left a friend of mine reminded me that hiking at high elevation was all mental and that I had what it took to get to the top. She encouraged me to use all my sport psychology skills that I teach others, including mental toughness, staying focused and persevering even when you want to stop.

I had staff who helped me every step of the way up this 19,341 foot mountain. To keep my mind positive and focused, I practiced walking meditation. I spent the first couple days of the hike doing loving kindness meditation. I would dedicate a portion of the trail to people I cared about, and would walk that section for them sending them 10,000 blessings from the mountain. I was reminded that when we dedicate our goal to something larger than ourselves and do it in service of others, then it matters less whether we are afraid and we find courage within we did not know existed.

Around 15,000 feet I started getting altitude sickness. To focus my mind, I did forgiveness work. I thought about people who had hurt me and felt the sting of it within my body, breathed into those areas while walking, and used the pain of it as fuel. Step by step, I felt these old hurts dissolve and begin to transform, until there was only forgiveness and me sending these people blessings and 10,000 wishes for their well-being. I felt lighter and stronger by this act of letting go. The power of forgiveness and leaving this old baggage behind gave me energy to keep going and I made it to base camp at 15,331 feet on the sixth night.

Edward told me to be a lioness on summit day as I approached the final climb of an elevation gain of 4,010 feet. I awoke at 4am and was on the trail by 5, I felt more like a zombie as I took a step, took a breath, rested, took another step, and then another breath. It was slow going. It is said that when you are pursuing a dream, you will be tested near the end. It is often hardest right before you reach your goal, as if life is seeing if you really want the thing you have struggled so hard to get and if you are willing to do the final work to reach the finish line.

People often make a series of small mistakes when the goal is just within their reach, sabotaging themselves so they never achieve it. I did not want to be one of them. By 17,000 feet I was struggling significantly with energy. Throwing up repeatedly, I just focused on taking one step after another up the mountain. My body screamed at me to stop and I kept reminding myself that just because it was difficult it did not mean that I had to give up. I kept focusing on my goal of reaching the summit. I kept going, one step, one breath, tapping into a strength deep within me and going higher and higher up the mountain. 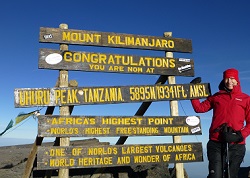 By 6pm, it became apparent that I was running out of time and would not make the summit. On top of that, I was exhausted. My head guide had carried me on his back for a small portion of the trail. My assistant guide, David, was carrying my backpack and two porters had joined me on either side supporting me under my shoulders to walk a little steadier and faster. I started praying for a miracle so I would make it to the summit. I did not want to let others down by not reaching my goal.

By some chance encounter the month before with a saleswoman at REI who had hiked the mountain and asked if I was going to camp at Glacier Camp, I had changed my itinerary from originally hiking up to the summit and back down to base camp in a day to camping much closer to the summit. This meant my team was close by. My guides seeing my struggle and desire to make it to the top gathered the group together and asked the porters to move the camp site to an 18,885 foot pass that led to the summit. It was cold and very windy on the ridge as we set up camp. Even though I had no appetite, I tried to eat and hardly slept that night as the winds howled outside my tent.

I awoke again at 4am and was back on the trail by 5. I joined other hikers guided by their headlamps who had been traveling since midnight to reach the peak. The air was thin, it was hard to breathe, and a windy snow storm had started. Step by step by step, I kept going. I thought of all the amazing people who had supported me on this journey, and was flooded with gratitude for them. I could feel their energy supporting me and cheering me on to keep going.

Reflections from the Summit

Edward asked if I knew what Uhuru Peak, the summit of Kilimanjaro and highest point in Africa at 19,341 feet, meant in English. It means "Freedom Point" he told me. The story behind it is that in 1964, the first Tanzania president scheduled a race to the top of Kilimanjaro. When a Tanzanian man arrived first, he hung the Tanzanian flag and built a fire so big at the top it could be seen from all directions. The light was so incredibly bright that when the Kenyans saw it, the light drove them back to their country and away from a possible attack and when the English saw it, the light finally convinced them to go home and return the land to the Tanzanians. It was a light of freedom that had been lit.

As I reached the top, the snow had stopped and the mountain was flooded with morning sunlight. I realized that this is why I am climbing this mountain - Freedom - the freedom that I can do this hike as an American woman traveling alone in Africa having been born into a culture and a family where this type of thing is possible. It is also the freedom that we all seek, our own inner liberation from struggle so that we might experience greater well-being, know a sense of peace, happiness and possibility in our own lives and work towards actualizing our own potential.

As I reached the summit, I imagined accessing this light of freedom and shining it brightly back down to everyone I know and everyone I will meet someday. I hoped that somehow this light from the rooftop of Africa might create a spark in others allowing their own inner light to shine more brightly. That it might serve as a catalyst to help others access more freedom from the things that bind them, connect them with a sense of their own power to make internal and external changes and feel more spaciousness in being true to themselves and navigating the world.

What this trip taught me is that so much is possible in life, if we keep working towards our goals one small step at a time, and that we can often only achieve these dreams if we have the support of others. I could never have reached the summit without the help of my team on the mountain and friends and family who supported me in small and large ways over the years. We all need champions of our dreams. These are the people who offer encouragement, support and resources, who lend a helping hand when we falter and believe in us even when we stop believing in ourselves.

While we may not want to climb an actual mountain, we all have heights that we want to reach. When we surround ourselves cheerleaders to help us get there and become this for others, then I believe any summit is achievable. To the friends and family who believed in me and supported me over the years and to the amazing staff on Kilimanjaro, who were right there by my side during the nine day hike, I bow in gratitude for traveling these footsteps with me.

For the latest news and resources from UW Health's Sports Medicine program, follow us on social.