A Divide and Conquer Strategy to Fighting Cancer

A Divide and Conquer Strategy to Fighting Cancer 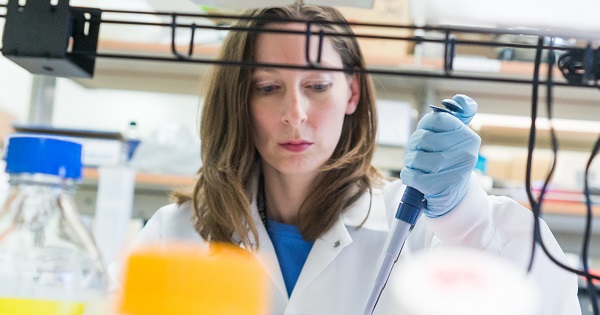 For more than three decades, Taxol has been the most widely used chemotherapy drug to treat a variety of cancers. Still, it only benefits half of patients treated with it, and no one really knows why.

“We knew in a dish in the lab that cancer cells treated with Taxol were getting stuck in mitosis, or when they were trying to divide, and preventing cells from dividing is one way to stop cancer,” said Beth Weaver, PhD, a faculty member at the UW Carbone Cancer Center and in the Department of Cell and Regenerative Biology who studies how DNA-containing chromosomes separate during cell division. “We assumed it was working in patients the way it was working in the lab.”

Through a collaboration with UW Carbone Cancer Center medical oncologist and researcher Mark Burkard, MD, PhD, Weaver obtained samples from breast cancer patients who had been treated with Taxol. She found that the idea of the past 30 years was incorrect: the concentration of the drug tested in the lab was much greater than the amount that entered a patient’s cancer cells. She needed to study lower, clinically relevant concentrations to understand how it benefits cancer patients.

Instead of getting stuck and not being able to divide, it turns out that the cancer cells are dividing, but their DNA is mis-segregating and going in all the wrong directions.

“At clinically relevant concentrations of Taxol, most cells divide into two cells as they should, but the DNA is dividing in three or four or five directions,” Weaver said. “Those two daughter cells did not get the right set of DNA.”

This notion of aneuploidy, where cells have incorrect amounts of DNA, has long been thought to be a hallmark of cancer, particularly the more aggressive ones. Weaver’s research is confirming but also challenging that thought.

“We found previously that aneuploidy is weakly tumor promoting, but it can also suppress tumors,” Weaver said. “A little of it is good for the cancer, but a lot of it is bad.”

Taxol, then, takes those cells that are likely to be cancerous because they are mis-segregating their DNA a little bit, and pushes them over the edge. That finding will help Weaver learn how to identify those patients who will benefit from Taxol.

"Because we don’t know how to predict a benefit, each case that is eligible to be treated with Taxol is, and there are side effects,” Weaver said. “We can now start to look for biomarkers of tumors that are prone to mis-segregating their DNA, and that will allow us to identify the 50 percent of patients who will benefit from Taxol treatment.”

So why did it take three decades of Taxol use to begin to understand how it works and who will benefit? Weaver said she was able to elucidate the clinical mechanism of action because of a defining feature of the Carbone Cancer Center: lab researchers working in partnership with clinical experts.

“I needed a clinical trial to get breast cancer samples from patients at the right time during Taxol treatment,” Weaver said. “I cannot design one myself, and I can’t run it, so we really need these collaborations between physicians and basic scientists.”