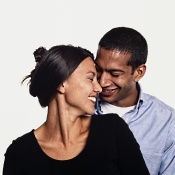 Madison, Wisconsin – Nearly two-thirds of cancer survivors experience problems with sex as a result of their condition and corresponding treatment.

In a 2010 LIVESTRONG survey of 5,400 cancer patients, sexual problems were the third-most prevalent physical concern reported by respondents.

Yet, according to the limited data available, only one in four physicians and one in five nurses talk about sexual issues with their cancer patients.

When it comes to the impositions of cancer on sex, the need for and interest in patient-provider communication is abundant. In fact, a study published in a 2009 edition of The Cancer Journal reported that 85 percent of respondents wanted to talk about sexual matters with their providers.

Why, then, aren't they having the talk?

For the same reason so many people, cancer patients or not, don't discuss sex, says Lori Seaborne, a physician assistant at the UW Carbone Cancer Center who, along with physician assistant Joanne Rash, runs the organization's Women's Integrative Sexual Health (WISH) program.

"The main issue is people are embarrassed to bring up the topic themselves, or are worried they will embarrass their providers," Seaborne says. "Patients think, 'If it's important, they'd ask me.'"

The embarrassment is a two-way street. Doctors and nurses don't want to make their patients uncomfortable, either, and aren't sure how to broach the topic.

Seaborne believes it's up to health care professionals to break that silence, and the World Health Organization agrees, saying, "Health care providers have a responsibility to understand and promote positive sexual behaviors and provide health services that promote sexually healthy societies."

"We have to assume everyone potentially could want to be a sexual person," Seaborne says, adding that health care providers must resist easy assumptions – "My patient is too old to want to have sex," is a common one – that discourage communication.

A good first step is to let patients know they're not alone. A cancer diagnosis on its own can foment feelings of guilt and despair, and those isolating emotions are only exacerbated by dramatic changes in sexual appetite.

"We can reassure our patients that they aren't the only people who have ever had sexual issues after treatment," Seaborne says.

Rash adds that providers need to "remember the emotional part of cancer. Patients often ask, 'How does this happen to me?' It plays in to how people feel about themselves, and how they feel about their sexual selves."

In addition to that emotional turbulence, cancer inflicts literal, physical changes resulting from surgery, chemotherapy and radiation treatments. Even in the era of minimally-invasive techniques, surgery can lead to scarring, and patients often report fatigue, pain and decreased sexual response following their procedures. Chemotherapy can induce an early menopause, vaginal dryness, nausea and changes in body weight. Radiation may result in nausea, too, as well as the loss of normal sensation.

"Sometimes we remove body parts – the vagina, vulva, clitoris," Rash says. "Breast cancer patients have an obvious, sensual organ removed. Radiation therapy can change how tissue in sexual organs feel. We need to anticipate the changes and educate people as to what they can expect."

All cancer treatments can decrease a woman's libido and instill an ambiguous sense that something has changed.

"The sexual self-identity is different," Rash says. "Women sometimes say, 'I feel like less of a woman' or 'I don't feel like myself. How do I trust my body to feel normal again?'"

One strategy the WISH program uses is to encourage couples to re-enact behaviors they may have forgotten since their initial courtship. Remember how exciting it was the first time you held hands? It can be exciting again, because in many ways a cancer diagnosis has compelled a new relationship, even if it features two people who have known each other for decades.

Rash also asks the couples with whom she works to not place too heavy an emphasis on sex. Intimacy, after all, is more than just intercourse.

"It's being connected with your partner," she says. "There can be new goals that are just as fulfilling – being intimate, being playful, being connected."

By being open and honest with one another, couples can come to a new understanding of one another and their relationship, and repel the conspiracy of silence that threatens relationships.

"Remind yourself about why you fell in love at the beginning," Rash says.