UW Med Flight is dedicated to serving the public as an aero-medical extension of the UW Health system.
We are available 24 hours a day, every day, to provide care and transport to critically ill or injured patients from a 250-mile radius in Wisconsin, Iowa, Illinois, Michigan and Minnesota.
Med Flight Timeline
Since its inception in 1985 the UW Med Flight program has witnessed many changes and made many improvements.
From the beginning, Med Flight has included a physician in its flight crew, and remains one of the few programs in the country to provide this level of care on air transports. Here are a few more milestones in Med Flight's history. 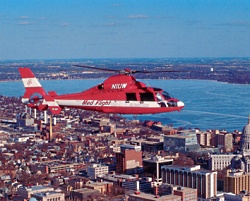