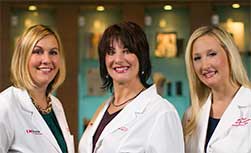 Rosacea (pronounced "roh-ZAY-sha") is a chronic and potentially life-disruptive skin disorder primarily of the face, often characterized by redness, swelling, dilated blood vessels, papules and pustules. Worldwide, there are roughly 45 million people with rosacea who suffer from the symptoms associated with the disorder, which include flare-ups and remissions.

Rosacea is primarily found in caucasian people of northwestern European descent, typically between the ages of 30 and 60. It affects both sexes and all ages, but is more common in women. Left untreated, it can worsen over time.

There are four rosacea subtypes:

Most individuals with rosacea have only mild redness and are never formally diagnosed or treated. No single, specific test for rosacea is known. Since the disorder can be confused with other skin conditions, such as acne vulgaris and/or seborrheic dermatitis, it is best to have a physician or trained medical professional confirm a diagnosis.

Avoiding triggers that worsen the condition can help reduce the onset of rosacea, but alone will not normally lead to remission, except in mild cases. Rosacea triggers may include:

Treatment options for rosacea include the following:

There is no cure for rosacea, but with proper skin care and treatments, the symptoms can be controlled.

Find out which peels, skin care treatments, products and cosmetics are right for you. Call (608) 836-9990 or (866) 447-9990 (toll-free) to request a free UW Health Transformations Jeune Skin Care consultation or to schedule an appointment. You may also Request a Free Jeune Skin Care Consultation online.