Q. How does smoking affect my skin?

A. Most of us are pretty informed about the effects that smoking can have on our overall health, but did you know that the habit also can play havoc on the skin?

Along with sun damage and hard living, nicotine can add years to your appearance.

Cigarette smoke contains more than 4,000 toxins, many of which are absorbed directly into the bloodstream and then taken into the skin's structure.

Smoking also causes the blood vessels in the top layers of skin to constrict, thickening and reducing oxygen to the skin. Without oxygen, the skin loses collagen.

A smoker's skin is normally thinner due to poor circulation, which of course establishes more lines and wrinkles.

In fact, a recent twins study at St. Thomas Hospital looked at 25 pairs of identical twins, where one twin was a lifelong smoker and the other never smoked. Using ultrasound technique to gauge inner arm thickness, some revealing results were found. The smoker's skin was 25 percent thinner than the non-smoker, and in some cases there were differences of up to 40 percent. 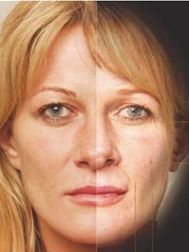 In 1985 the term "smoker's face" was added to the medical dictionary and was defined as the following:

Smoking is a difficult habit to stop, but if the effects it can have on overall health isn't enough to make us think twice, the reflection in the mirror might…