U=U: Is it a Slogan or is it Science?

U=U: Is it a Slogan or is it Science? 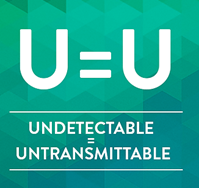 U=U (undetectable equals untransmittable) seems to be everywhere: on social media, in magazine ads, at subway stops… except perhaps in your hometown. But what does U=U mean? Why is it being promoted? And how can you study something that is "not" happening (the transmission of HIV by someone taking their medication and maintaining undetectable HIV)?

Way back in 2002, when "Hot in Herre" by Nelly was a hit song, there was already evidence to suggest that a PLWH (Person Living with HIV) who was taking their medication was very unlikely to pass the virus to a partner through sex (vaginal, oral or anal). This was called "Treatment as Prevention" or TasP. TasP is the foundation for U=U. At that time, it was unclear exactly how unlikely HIV transmission could be. Since then, there have been four different studies of serodiscordant sexual partners (one partner is living with HIV and the other is not), and each of these studies has built confidence in U=U, the concept that complete viral suppression prevents HIV being transmitted (passed on) through sex. A group called the Prevention Access Campaign developed the U=U message to help the general public understand the science behind this.

Collectively these 4 studies followed approximately 2,500 couples over more than 150,000 episodes of sex and showed no cases of a person who was consistently undetectable on therapy having passed the virus to their partner. A small number of people in these studies did acquire HIV, but careful analysis showed that the virus came from a different partner or occurred during a period of time when the partner living with HIV did not have a suppressed viral load. In some cases, couples were using condoms and/or the HIV negative partner was taking Pre-Exposure Prophylaxis (PrEP). There were some couples (Male-Female and Male-Male) who had an average of 42 sex acts per year without a condom and there were no documented HIV transmissions from the partner with undetectable HIV to the partner without HIV.

While getting and keeping an undetectable viral load prevents HIV transmission during sex, there are reasons why a PLWH and their partners may consider adding other prevention options like condoms and PrEP. Condoms can prevent other sexually transmitted infections and/or pregnancy, but now people have options.

What does U=U mean for PLWH?

While this is great news, what does it mean for a PLWH? Is viral suppression "good enough" or do my test results really need to be undetectable? Will someone believe me if I tell them about U=U?

A PLWH can have viral suppression from antiretroviral medication, but still have a detectable HIV viral load. The term "viral suppression" means having a very low viral load (less than 200 copies of HIV per milliliter of blood). In fact, in the studies mentioned, there were times when virus was detectable up to 200 copies, so even very small amounts of detectable virus in the blood may not be enough to transmit the virus through sex. The key factor is that the virus remains undetectable or very low throughout the period that sex is happening. Small amounts of virus could suggest the virus is breaking through, so in this case it might be important to have the viral load measured more frequently. Running out of HIV medication for as little as 2 weeks can allow rebound of the virus. Getting labs done when your provider suggests can increase your confidence that the virus is consistently undetectable or at least very low (virally suppressed).

How can I help people without HIV understand this information?

There are many public health departments that provide information about U=U, including the Wisconsin Department of Health Services HIV Program. There is a British website called i-base that has the information in multiple languages. The authoritative Centers for Disease Control (CDC in the US) has a lot of general and detailed information on their website, as well as a short YouTube video. If you would like to see information presented in other ways, please let us know what would be helpful, and hopefully this short piece has helped you feel more confident in the science behind preventing HIV through medication and fights stigma.