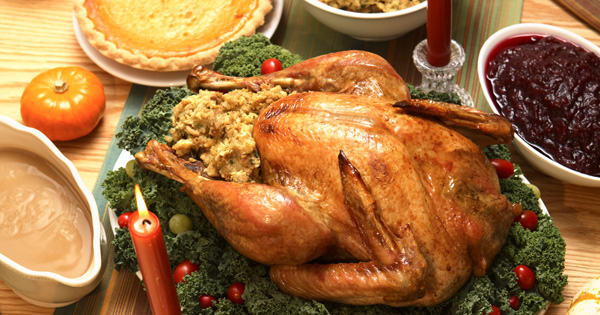 After they gorge, however, their hearts may feel a little differently.

The traditional turkey-day feast, replete with fatty, high-cholesterol foods like drumsticks, mashed potatoes, gravy and stuffing, is generally anything but heart-healthy.

But a little careful planning and portion management can allow you to enjoy your holiday meal without damaging your cardiovascular health in the process.

"In general, we say 'All things in moderation, and of course, enjoy your holiday meal with your family and friends,'" says Patrick McBride, MD, a preventive cardiologist and associate professor of medicine with UW School of Medicine and Public Health. "And given that in America, every week brings some kind of holiday, that's especially true of holiday meals."

He can say that again. It's possible-in fact, even likely-for the average person to rack up 2,000 calories in a single Thanksgiving sitting. For those of you scoring at home, that's the recommended number of calories for most adults for an entire day.

Of course, adjusting your Thanksgiving recipes can make a big difference in their relative heart-healthiness.

"Could you use yogurt instead of sour cream, or maybe just egg whites?" says Dr. McBride.

Using light butters and margarine can also lower levels of saturated fat without sacrificing too much taste. Even gravy, Thanksgiving's highest fat recipe, can be made in a healthier way.

If you plan to try the healthy route and you're not doing the cooking, McBride suggests that half of your Thanksgiving plate should consist of fruit and vegetables, with a fourth devoted to meat and a fourth to potatoes or stuffing. If you're having pie, limit the serving size. Oh, and resist that second helping.

Lest you feel that rain's falling on your Thanksgiving parade, McBride is quick to point out that nutrition is a long-term issue. In other words, one meal doesn't create permanent damage to your heart and arteries.  And a great strategy is to get in a long session of exercise on Thanksgiving day before the feast.

"It's a holiday meal and we know that people can and should enjoy it," he says. "There's a reason we've never held a cholesterol screening clinic on the Friday after Thanksgiving."