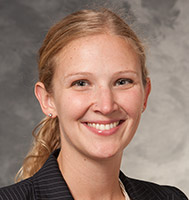 How to refer a patient

It's Time to Talk About Accidental Bowel Leakage

The Advantages of a Women's Pelvic Wellness Clinic

Faculty, University of Wisconsin School of Medicine and Public Health

Dr. Heidi Brown is a member of the UW Ob-Gyn Division of Gynecology, and is board-eligible and specializing in Female Pelvic Medicine and Reconstructive Surgery. After graduating magna cum laude with a Liberal Medical Education (Community Health) degree from Brown University in 2000, Dr. Brown pursued her MD at Brown University’s Warren Alpert School of Medicine between 2001 and 2006. During medical school, she also completed a year-long fellowship in Applied Epidemiology with the Centers for Disease Control and Prevention in Atlanta, Ga. Dr. Brown spent 2006 to 2010 as a resident in Obstetrics and Gynecology at the University of Pittsburgh Medical Center, Magee-Women's Hospital. She completed her Fellowship in Female Pelvic Medicine and Reconstructive Surgery at the University of California, San Diego, in June 2013 and received her Masters in Advanced Studies (Clinical Research) degree in March 2013 from the same institution. Her primary research focus is on barriers to care-seeking for pelvic floor disorders.

Dr. Brown is a member of the International Urogynecological Association (IUGA) Publications Committee, among other professional associations, and a recipient of numerous academic awards, scholarships, and research and training grants in the areas of Community and Women's Health and Gynecologic Surgery. Among many other honors, Dr. Brown was selected as the Berlex Best Second Year Resident Teacher by first year residents in her program, and received the Society of Gynecologic Surgeons (SGS) President's Award for Outstanding Research in Gynecologic Surgery.

Dr. Brown volunteers as a visiting faculty member at Georgetown Public Hospital in Georgetown, Guyana, where she teaches urogynecology to Ob-Gyn residents. She looks forward to taking part in similar work in Ethiopia through the UW Department of Obstetrics and Gynecology.