Fighting Cancer So Kids Won't Have To

When 12-year-old Mihir suddenly had difficulty breathing, his parents rushed him to urgent care where a scan revealed a mass in his chest. A day later, a biopsy confirmed a shocking diagnosis: Stage 3 Hodgkin Lymphoma. Mihir began treatment the next day, spending his summer undergoing five rounds of chemotherapy, followed by radiation in the fall.

Nearly two years since that fateful day when their journey began at American Family Children’s Hospital (AFCH) in Madison, Mihir and his mother, Radhika, reflect on their experiences…

Mihir: I remember that day when you and Dad broke the news to me, I asked you directly, ‘You mean I have cancer?’ 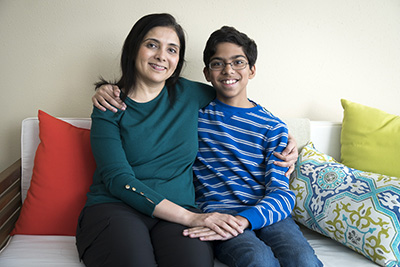 Radhika: We decided to be the ones to tell you. I wasn’t sure how you would react, but thought that the more you knew, the more you would feel in control. We were all in shock. It took me a month to even be able to say the word ‘cancer’ out loud. It was easier to say Hodgkin Lymphoma when discussing the diagnosis.

Mihir: It was the last week of school and even though I had to start chemo immediately, what I kept thinking about was being able to meet up with my friends on the last day of school. Dr. Diamond said, ‘If that’s important to you, we will make it happen.’

Radhika: That was eye-opening for me. While I was worrying about prognosis and the future, you were still a kid, thinking about your school life. It helped me see the big picture – it wasn’t going to be just about medical care, but also making sure you could do the things you enjoy. Part of that meant not being at the hospital longer than we needed to be.

Mihir: So, I had chemo during the day, but was able to sleep at home most nights. There were things we had to do ourselves at home, like getting shots between chemo cycles and taking care of my PICC line, which made showering difficult. I will never take showering (without medical equipment getting in the way) for granted again!

Radhika: Things moved very fast. We knew we were in the right place. Since AFCH is part of the National Children’s Oncology Group, there were standard treatment protocols, so we didn’t have to weigh options and seek second opinions. We could respond quickly.

Mihir: At first, it’s really hard to accept that your normal life has been taken away – you just want it back!  But in order to get back, you have to go through some hard stuff.  I was willing to do whatever it took.

Radhika: The medical team really engaged Mihir and spoke directly to him. After all, he’s the one who had to go through it all, physically. They do a great job of involving the parents and sharing information readily.

Mihir:  So many people helped make it better...Dr. Kelly Bush, Dr. Carol Diamond, Nurse Katy (she really got me), and Brittany, the Child Life Specialist, who distracted me during many, many pokes (she even made it fun)…the volunteers who played board games with me (my favorites: Battleship, Pictionary with Clay). I really liked the schoolhouse with books and activities. I even got to go on a Make a Wish trip to Italy!

Radhika: One of the things Mihir had struggled with initially was trying to understand the why. Why me? Why now? Not in self-pity, just not understanding. Then one day he came to me and said, ‘I know why. It’s leading me to be stronger.’ 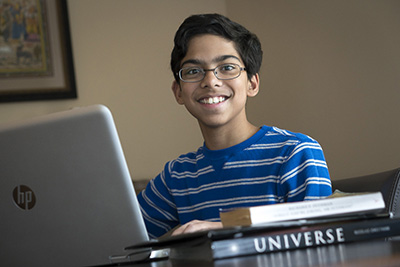 Mihir: Eventually, I was able to have fun with the situation. I named my tumor (Mr. Hodgkin), drew cartoons (scenarios my tumor was finding itself in) and wrote haikus.

Radhika: It’s wonderful to see our son well again. He has an amazing attitude and a natural positivity. Before this, our family had very little experience with healthcare, so this was a new world for us. UW Health made it manageable and the best it could be, under the circumstances. As a family, we have grown closer. It’s been challenging, but it’s also opened new doors and deepened our appreciation.

Mihir: I look back and see the people who helped me and how much I learned from it all. Good things can come out of experiences like this.  It’s made me appreciate life – all the little things.  Looking to the future, I plan to study aerospace and work for Boeing. But first, I’m writing my memoir…