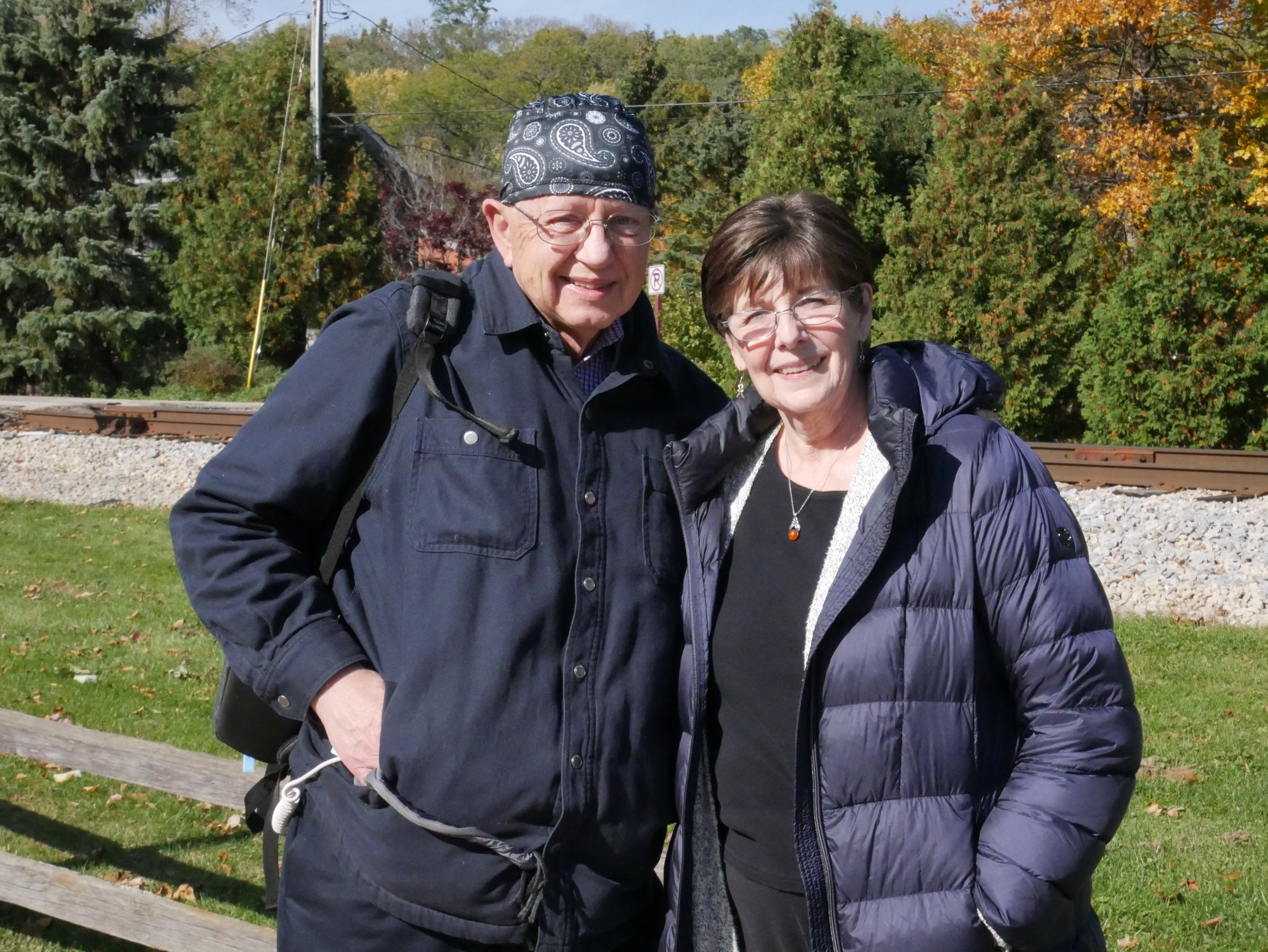 Dan Ferguson with his wife, Rene.

While playing hockey for Notre Dame in the 1960s, Daniel Ferguson took plenty of hard falls on the ice. Aside from some nasty bumps and bruises, however, Dan never experienced anything since that could be called a health scare. He continued leading a healthy lifestyle well into his 70s by swimming, bicycling or running almost daily and competing in close to 20 triathlons since he turned 60.

Something unusual, however, surfaced this past summer when Dan, now 76, an engineering education professor at Purdue University, and his wife Rene (rhymes with "teeny") were vacationing at their summer home in northern Michigan in July 2019.

"I noticed Dan's face was drooping on the left side," says Rene. At first, she thought Dan had a stroke, but after getting it checked out by a neurosurgeon who did a CT scan and an MRI at a hospital in northern Michigan, Dan couldn't believe the news.

"The doctor's last name was Strait, and believe me, he gave it to me straight," Dan says. "The MRI showed I had a very aggressive brain tumor. The doctor said I had one to 12 months to live."

Life suddenly turned into a tsunami for the Fergusons. Dan and Rene told their three children, who helped relieve Rene with insurance company navigation, meal preparation and other vital tasks. Once they got past the shock, they sought out the best medical team they could find. Unfortunately, a neurosurgeon in Indianapolis – a little more than an hour's drive from the Fergusons' primary residence in West Lafayette, Ind. – couldn't offer much hope.

"The Indianapolis neurosurgeon wouldn't operate because he felt the location of my tumor in the region of my brain called the insula made surgery too risky," Dan says. "He offered to do a biopsy and then refer me for radiation and chemotherapy, but I wanted the tumor removed."

Fortunately, the Fergusons' younger adult daughter, Julia, recalled that a close friend from graduate school at UW-Madison, Kara Dempsey, is related to Robert Dempsey, MD, who happens to chair the Department of Neurosurgery at the University of Wisconsin.

"Julia's connection with Dr. Dempsey's family was a glimmer of light," says Rene. "Dan and I had never met Dr. Dempsey when the girls were in school together, but not long after Dan's diagnosis, we spoke with him by phone."

"Dr. Dempsey didn't mince words," says Dan. "He said, 'If anyone in my family had a tumor like this, I would send them to one person to remove it.' " That individual was his colleague, UW Health neurosurgeon Mustafa K. Baskaya, MD.

"Dr. Dempsey said that Dr. Baskaya is one of the leading neurosurgeons for this kind of tumor," says Dan. "Rene and I decided immediately to come to Madison."

Just two weeks after learning of his startling diagnosis – a glioblastoma multiforme or grade IV astrocytoma – Dan was taken to the operating room at UW Health's University Hospital.

That day, July 19, 2019, Dr. Baskaya spent more than six hours resecting every bit of Dan's tumor that was visible on his MRI. Working with advanced patient safety technologies such as intraoperative MRI, high-tech surgical microscopes with special dyes, subcortical stimulator and motor-evoked potential recording, Dr. Baskaya was able to achieve gross total removal of the tumor without damaging parts of the brain that control Dan's motor skills.

"Dan had a very good result with the surgery," says Dr. Baskaya. "At the same time, this is a deadly brain cancer that often comes back. Dan's only chance at longer survival – and the best possible quality of life – is to have someone with extensive experience remove the tumor gross totally, which is what we did without compromising motor function."

Just five days after surgery, Dan was discharged from the hospital, but given how far the Fergusons were from home, Dan and Rene stayed in Madison for the next two weeks of recovery. They easily made themselves "at home" in a room at the Best Western Plus InnTowner, just a few blocks from University Hospital.

Despite Long Travel, Dan Opts for Follow-up at UW Health

Given the aggressive nature of Dan's disease, courses of radiation and chemotherapy would soon begin. He could have started both treatments closer to home, but Dan was so pleased with his surgical care at UW Health that he decided to come back to Madison for radiation therapy with Steven Howard, MD, and oncology care with Ian Robins, MD.

"Long car trips are nothing new for us," says Dan, noting that the Fergusons regularly drive more than 400 miles each way between West Lafayette and their cabin in northern Michigan. "Even though I could no longer drive after surgery because of the risk of a future seizure, Rene didn't mind the driving. We were so impressed with the quality of care at UW Hospital that we felt it was worth the trip."

Fifteen radiation treatments – five days a week for three weeks – concluded in September, but they took a toll on Dan's energy level. For someone used to being so physically active, the loss of stamina was frustrating. He also lost 15 pounds because of a loss of appetite.

"I didn't have much 'Get up and go,' " Dan says. "But whenever I could, we found our way to several Madison parks and conservation areas for walking, and the time outside really helped break up the days living at the hotel."

With radiation completed, Dan slowly began to perk up. In early November, he began taking double-dose chemotherapy – in pill form – six days each month for six months. Just before that, he also started using a new FDA-approved glioblastoma treatment called Optune, a wearable, portable battery-powered device that delivers electrical tumor treating fields through small arrays that are taped to the top and sides of Dan's newly shaved head. Based on results from clinical studies, Optune may extend the life expectancy for glioblastoma patients by sending electronic signals that disrupt the formation of more cancer cells in the brain without affecting healthy cells.

"The Optune device is about 9-inches square, weighs 3½ pounds and fits in a neat shoulder bag or backpack which goes with me everywhere," Dan says. "I have it connected 20 to 22 hours a day. It's not clear how much it will extend my life, but the clinical studies are promising, so I'm more than willing to try it."

An engineer by trade, Dan spent most of his life immersing himself in data and details. There are times, however, when he prefers not to know every aspect about his disease and the odds of it coming back.

"You've heard of 'TMI?' " Dan says, referring to the popular acronym standing for 'Too Much Information.' "My code abbreviation for information overload is 'TMMI,' meaning 'Too Much Medical Information.' "

He also has made several dietary changes – no added sugars, plenty of protein and other healthy foods – aimed at keeping the cancer at bay. "General Rene" – a name her brother gave her in fun – takes charge of Dan's medicines, diet, and transportation needs. She juggles the kind offers of help from friends and family members. Above all, Rene's undying love and support for her husband of 51 years is truly a joy to behold.

"As wonderful as the doctors and this hospital have been, I have no doubt that the care my wife is giving me is every bit as vital," says Dan. "I am so grateful to her, my children and our friends, and I firmly believe that patients lucky enough to have this kind of support will have better outcomes."